Men are skewing online ratings of female-oriented TV shows, giving them worse scores and dragging down the series average.

According to an analysis of IMDB ratings for popular TV shows by FiveThirtyEight‘s Walt Hickey, the more popular a show is among women, the more likely it is to be rated poorly by men. 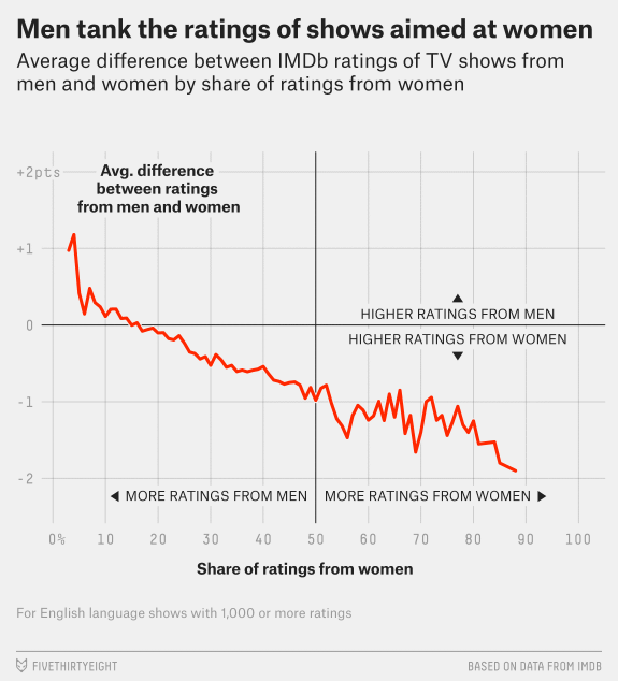 Looking at the English language series that received 1,000 or more ratings from users, Hickey found that the larger share of ratings coming from women, the lower men rated the show on average. And the effect is not nearly as severe in the opposite case.

And as Hickey points out, that’s not necessarily an indication of quality:

But the data doesn’t support the contention that female-skewed programming is inherently worse: Women gave their top 100 shows, on average, a 7.8 rating, about the same score they gave the top 100 male-dominated programs, 8.0. But here’s where that Twitter egg’s perception might come from: Men gave their top 100 an average score of 8.2 but gave the top 100 female-skewed shows a mere 6.9 average ratings. Shows with more than 10,000 ratings are inherently popular and yet men thought the programs in that group that skew female were below average.

But men and women did generally agree when it comes to their favorite shows. According to Hickey’s analysis, shows like “Game of Thrones,” “Sherlock” and “The Wire” were among the top-rated shows for both genders.

From The CW’s ”No Tomorrow“ to ABC’s ”Designated Survivor,“ these are the shows that grabbed us

"No Tomorrow" (The CW): Tori Anderson looks to follow in the footsteps of Gina Rodriguez and Rachel Bloom as the network's latest quirky, funny leading lady, playing an uptight woman who's swept off her feet by a guy who may be crazy or may be right about the world ending in 8 months. The CW's dramedies have become just as important a part of the network's slate as its ever-expanding superhero adaptations, and this one looks like a fitting new addition.
View In Gallery
x