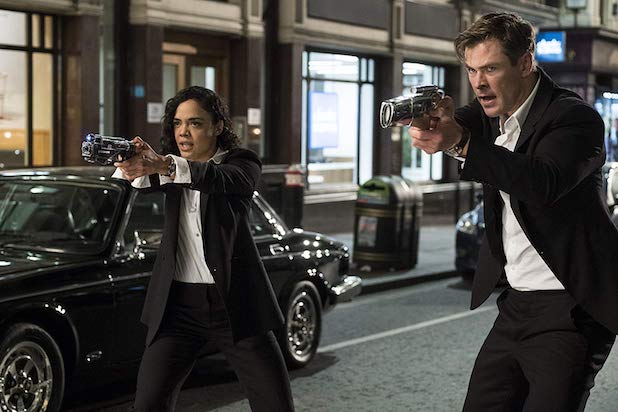 “Men in Black: International,” Sony’s reboot of the ’90s Will Smith sci-fi comedy franchise, earned $3.1 million in its Thursday box office previews starting at 4 p.m. from 3,472 locations. It opens on over 4,200 screens this weekend.

“Thor: Ragnarok” stars Chris Hemsworth and Tessa Thompson are putting on their best black suits and sunglasses as they hope to keep the franchise alive despite the absence of mainstays Smith and Tommy Lee Jones across the three films dating back to 1997.

It’s a big risk for Sony, which is projecting a $30 million opening opposite a $110 million budget, which is still less than half the previous “MIB” film’s budget. Independent trackers say the film could go as high as $35-40 million. However, all three previous “Men in Black” films managed to open in the low $50 million range. A good comparison is Sony’s own reboot of “Ghostbusters” from 2016. That film opened to $46 million after earning $3.4 million in its Thursday previews.

Hemsworth and Thompson star with Liam Neeson, Emma Thompson, Rebecca Ferguson, Rafe Spall and the voice of Kumail Nanjiani as they operate out of MIB London and work to protect the universe from an alien horde called The Hive. F. Gary Gray directs. The project is co-financed by Hemisphere and Tencent.

Also opening this weekend is “Shaft” from Warner Bros. and New Line and co-financed by Netflix, which is an updated take on the 1970s blaxploitation classic starring Samuel L. Jackson reprising his role as John Shaft Jr. The film brought in $600,000 in its pre-shows on Thursday.

“Shaft” is projected for a $20 million opening against a $30 million budget. Jackson’s “The Hitman’s Bodyguard,” which opened in the late summer in 2017, made $21.3 million in its opening weekend after earning $1.7 million in its Thursday previews.

Jackson leads the cast as Shaft as he enlists his family’s help to uncover the truth behind his best friend’s death. He’s joined by the original ’70s Shaft, Richard Roundtree, and Shaft’s son JJ as played by Jessie T. Usher. Regina Hall and Alexandra Shipp also star in the action comedy directed by Tim Story from a script by Kenya Barris.