A version of this story about “Prayers for the Stolen”first appeared in the International issue of TheWrap’s awards magazine.

“Prayers for the Stolen,” Mexico’s entry in the Best International Feature Film Race at the Oscars, deals with a trio of young girls growing up in a Mexican mountain village where a drug cartel looms as both a threat and a potential employer. TheWrap sat down with Tatiana Huezo, a long-time documentary filmmaker making his first work of narrative fiction for Netflix.

Have you been looking to move from documentaries to narrative fiction?
Yes, I think it was good for me to take on this challenge. I do think that in my documentaries I was already doing narrative and aesthetic work that was close to fiction. For example, I have the lives of my characters acted out in the documentaries, and I work out the dramatic structure and prepare for one or two years even before I shoot. I also imagine what the film must look like, what the sensations of the film are, what the color of the film is. In some ways, deciding to embark on this project was a way of pushing all that investigation even further.

Are there ways in which narrative fiction is more challenging than nonfiction?
Yeah. Just speaking in terms of the production machinery that fiction involves, it’s exponentially larger than documentary. For 15 years I’ve only been working with a crew of 15 people, but on this movie we had more than 100 people on the crew, and many different departments that are new to me. Costume, makeup, animal trainers, visual effects… The art department alone was almost like a small army. 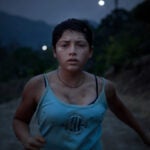 Also Read:
‘Prayers for the Stolen’ Film Review: Young Women Live Their Lives Despite Growing Up in Danger

For example, in (the documentary) “Tempestad,” because water and storms were very important, I actually employed meteorologists who would guide me to where the storms and the wind was. In this film I also wanted there to be a lot of rain and wind, but instead I had this amazing special effects team who could make it rain when I said rain. And it was also really interesting for me to actually create the sets – the whole poppy field was something that we constructed for the film. The same art department constructed each of the flowers, each of the bulbs, all made out of latex. In the houses that have mold, all the mold has actually been drawn by the people in the art department. That’s the biggest difference, that in fiction you have to create everything.

You were also working with first-time actors, weren’t you?
Yeah, in fact casting the girls was the most important thing for me. I had to find these three bright 8-year-olds, and three respective, almost cloned teenagers. It took us about 12 months to find them. About 800 girls were auditioned in order to find the six protagonists, and we trained them for three months.

How did you find this particular story from novelist Jennifer Clement?
I was working with kids in rural schools in order to do my next documentary when the story arrived in my hands from the producers Nicolas Celis and Jim Stark. I didn’t think they were actually going to offer it to me, but I read the novel in three days and thought it was amazing. I really loved the 8-year-old main character, and the almost journalistic approach to the story of the growing of the poppy field. And when I shared with them my opinion about the novel, they immediately asked if I would be interested in directing the movie.

But I didn’t really know how to do other people’s work. I only felt like I could approach this film from a very personal place about childhood and what it means to grow up, which is a territory that I’m very close to in my personal life, because I have a young daughter who is discovering the world.

Much of the danger these girls face is unspoken. We know Ana’s mother is cutting her hair short because appearing too feminine could make her a target for sex trafficking. But nobody talks about it.
For me, it was fundamental to not represent the violence graphically. The violent monster is outside the frame. We hear it and we feel it through the girls, but I really thought it was important to not represent it explicitly — especially because in Mexico we’re very much contaminated by images we see constantly in the news of gunfights, people dead or decapitated or hanging from bridges. For me it was important to pull back from that and tell the story through the eyes of a young girl.

Do you plan to director both narrative films and documentaries from here?
I feel very strong after having done this film, and I feel like I have the freedom to go back and forth. At the essence level of what a film is, I don’t really see a huge difference between documentary and fiction. Either one is a journey in which you are invited to live through the skin and the experience of someone else. And it’s also an emotional and a very sensory-driven experience.

I am doing a new documentary now, and after that I will start writing my next fiction film.