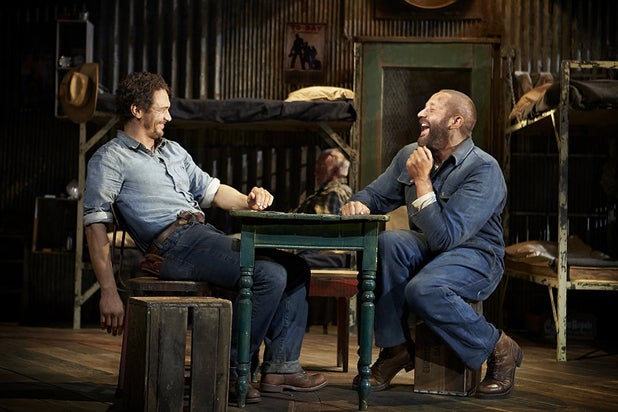 Yes, they can. Both of them. And that includes James Franco.

When big stars make their Broadway debuts, especially those big stars who don’t have much of a theater pedigree, the first question has to be: “So, can they act? On stage?”

Since the disappointment of Julia Roberts‘ Broadway debut (“Three Days of Rain,” 2006, preceded even more infamously by Madonna’s 1988 debut, in “Speed-the-Plow”), movie stars have acquitted themselves quite well on old Broadway.

Also read: James Franco Didn’t Know He Has a Cameo in ‘Dawn of the Planet of the Apes’

In the current “Of Mice and Men” revival, which opened Wednesday at the Longacre Theatre, Franco and stage vet Chris O’Dowd do something much more than not embarrass themselves. They bring vibrant and poignant life to a play that, since its 1937 premiere, has been revived only once before on Broadway, 40 years ago.

There’s not much poetry in John Steinbeck’s writing here; most of the dialogue comes verbatim from his novella of the same year, and he called that work “a playable novel.” It’s effective theater in the same melodramatic way that “The Heiress” can be effective theater, if presented well.

Director Anna D. Shapiro presents “Of Mice and Men” very effectively, and has assembled an excellent cast with standout performances from not only Franco and O’Dowd but Jim Norton and Ron Cephas Jones as two other loners among the play’s many desperate drifters in the agricultural big business of Depression-era California. Like the other itinerant farm workers they meet, Franco’s George and O’Dowd’s Lennie are lonely because they’re broke, and there’s no way out for any of these men except in their dream to buy a little farm somewhere. Nothing feeds melodrama like the vagaries of capitalism.

O’Dowd, who’s well known to theatergoers in London and Dublin (he also guest-starred on HBO’s “Girls”), brings a surprisingly feminine grace to the mentally challenged Lennie, a quality that makes his shifts into violence all the more shocking. He’s a big man on stage, but the real joy in this performance is watching his hands. The gestures are so delicate, as if his fingers can express what his tongue can’t.

Franco completely abandons any trace of the laconic slacker that’s defined his best-known screen portrayals. Here on stage, he’s both strong and determined; in fact, in his character’s early scenes with Lennie, he appears to be overly combative, controlling. Later on, it’s clear that his domineering George hasn’t erred, and may have been lying to his bunkmates about what really happened between Lennie and the woman who charged him with rape in the previous town. As any George must, Franco carries “Of Mice and Men.”

Shapiro creates a strong community of men around George and Lennie. Each of them, in his own way, is just as isolated, although some of them hide it better due to their youth, violence or drunkenness. Only Leighton Meester as the distraught wife, who “just wants somebody to talk to,” overstates her predicament.