Hours after deactivating his account, Michael Che returned to Instagram on Friday with a post asserting he’d been hacked “again,” which we *think* is probably a joke.

Che deactivated his account earlier in the day after he posted jokes at the expense of gymnast Simone Biles, including one about Larry Nassar, the doctor she accused of sexual abuse, which provoked a significant social media backlash.

Just before deleting his Instagram account, he posted a message saying “Man, I got hacked today, can’t believe they got me. Yall kno [sic] I only do jokes about whites and cops. S’all good now, I changed my password and everything.. anyway, y’all hear about dababy though? thay’s crazy.” 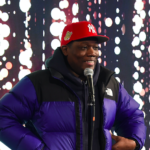 He returned hours later by posting a black image with white letters that said: “Mannnn, yall not gonna believe this s—.. I got hacked again.” And, he captioned the post, “clearly somebody tryna turn us against each other. I dunno why…”

It’s hard to tell — reading something is different than hearing it — but if we had to guess, Che is just kidding about being hacked. But who knows, maybe it was, as several of his followers joked, actually Che’s “Weekend Update” partner Colin Jost screwing with him.