“The Shield” alum Michael Chiklis is playing legendary NBA Boston Celtics coach-turned-general manager Red Auerbach in HBO’s new series “Winning Time: The Rise of The Lakers Dynasty,” and TheWrap has an exclusive look at the actor in character.

In the new pic, Chiklis, as Auerbach, is seated at a table during what looks like the NBA draft.

“Red Auerbach was one of a kind,” Chiklis said in a statement to TheWrap. “A larger than life character and competitor. In a word…iconic. What a blast to slip into his jacket for a while as an actor and a guy from the Boston area.”

Here’s a description of Chiklis’ character, per HBO: As the coach of the Celtics, Red Auerbach won nine NBA championships. As general manager, he won seven more. When the Lakers’ rise threatens his Boston dynasty, Auerbach proves himself to be the basketball genius and cut-throat competitor of every Laker fan’s nightmares.

Premiering March 6 on HBO (it will also be available to stream on HBO Max), “Winning Time” follows the professional and personal lives of the 1980s Los Angeles Lakers, “a team that defined an era, both on and off the court,” per HBO’s logline. It’s based on Jeff Pearlman’s book “Showtime: Magic, Kareem, Riley, and the Los Angeles Lakers Dynasty of the 1980s.”

During a panel with TV reporters on Tuesday about the show, executive producer Adam McKay addressed how the show looks at the change in basketball from Auerbach’s era brought on by Magic Johnson and the LA Lakers. 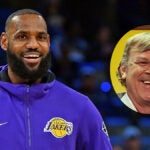 “With Magic, what was so amazing about him was that he was this blend of joy and skill and winning that, up until that point, you had the Red Auerbach era of the NBA in the ’60s and there was this idea that Bobby Knight, sort of three passes before you shoot was the answer. And what’s so amazing about Magic, we know the smile, we know the incredible creativity, but he was a winner,” McKay said. “And I think that’s what’s so exciting about this story is you saw this style that previously people would have rolled their eyes at becoming the dominant style of the NBA.”