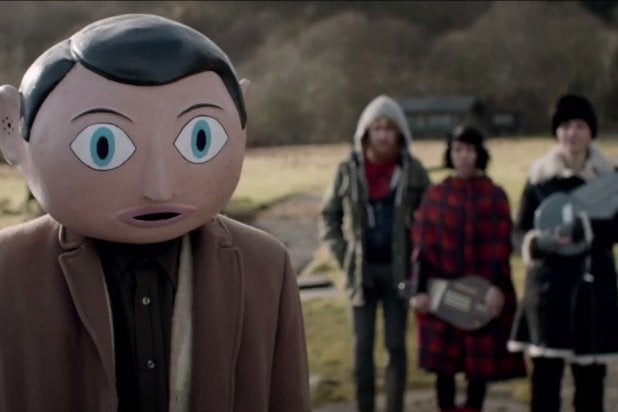 Michael Fassbender stars in “Frank,” but he isn’t seen very much. That’s because his character, an eccentric musician, spends literally every moment of his life wearing a giant papier-mache head, according to other members of his band.

One scene in the film’s official trailer would seem to back this up, as it shows Frank in the shower with the giant fake head wrapped in plastic … and on his head. In fact, he’s shown sporting the head in every imaginable situation, including performing on stage, trying on clothes and even getting hit by a car.

The head is fashioned to look very much like one worn by real-life British musician and comedian Christopher Mark Sievey for his fictional persona, Frank Sidebottom. The film was largely inspired by the Frank Sidebottom character, though it fictionalizes Sievey’s story.

The film was co-written by Jon Ronson and Peter Straughan. Ronson was part of Sidebottom’s band, and his writings greatly influenced the direction of the film.

The British-Irish dramedy premiered at the 2014 Sundance Film Festival. Frank’s opposite in the film is Jon, portrayed by Domhnall Gleeson (“Harry Potter and the Deathly Hallows”), a young musician who joins Frank’s band and starts filling their heads with ideas of fame.

With the band looking to appear at South by Southwest, cracks begin to form. Frank never cared about success or superstardom. He did what he did for the love of the music.

After premiering in film festivals across the country since January of this year, Magnolia Pictures will distribute the Film4 production in limited release to United States theaters on Tuesday, August 22.