Michael Mann has written a combined prequel and sequel to his landmark 1995 crime film “Heat,” to be published by Harper Collins on Aug. 9.

The new book is not a retelling of the original film but a story set both before and after the events of “Heat.”

“It’s been my intention for a long time to do the further stories of Heat,” Mann told Deadline, which first reported the news. “There was always a rich history or back-story about the events in these people’s lives before 1995 in Heat and projection of where their lives would take them after.”

Harper Collins debuted the cover of the book and the first trailer for the project Wednesday.

Mann wrote the crime novel with Edgar Award winner Meg Gardiner. This project represents Mann’s first novel as an author and the first novel from his imprint, Michael Mann Books, which has signed a multiyear, multimillion-dollar deal with William Morrow, a division of Harper Collins.

The novel starts one day after the events of the film with a wounded Chris Shiherlis (played by Val Kilmer in the film) desperate to escape L.A., then moves to both the six years preceding it and the years immediately after, featuring new characters and new worlds of high-end professional crime.

Ranging from the streets of L.A. to the inner sanctum of rival Taiwanese crime syndicates in a South American free trade zone, to a massive drug cartel money-laundering operation just over the border in Mexico and eventually to Southeast Asia, “Heat 2” explores the dangerous workings of international criminal organizations. 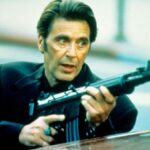 It features LAPD homicide detective Vincent Hanna (played by Al Pacino) in Chicago, including the remains of his earlier marriage, the effects of his Marine Corp service in Vietnam and conflicts within the Chicago PD where he discovers his life’s calling – the pursuit of armed and dangerous felons into the dark and wild places. In Chicago, that includes the hunt for a new and particularly vicious crew.

Michael Mann Books is represented by Shane Salerno of The Story Factory who presented the idea of an imprint to the filmmaker and brokered the deal with Harper Collins.