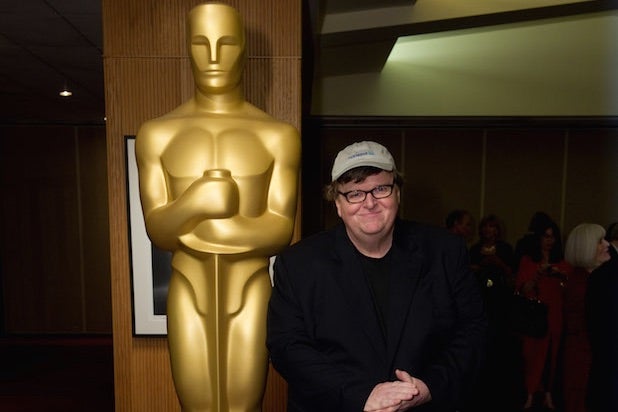 Michael Moore seized the opportunity while receiving a lifetime achievement award at the Critics’ Choice Documentary Awards on Saturday to read the rest of the Academy Award acceptance speech he was unable to complete 15 years ago because he was pulled off stage for speaking out against the Iraq War.

In 2003, Moore won the Oscar for Best Documentary Feature for his gun control documentary “Bowling for Columbine.” After being handed the Oscar, Moore declared his opposition to the invasion of Iraq and harshly criticized then-President George W. Bush, earning a loud mix of cheers and boos from the audience.

Upon receiving his lifetime achievement award in New York this Saturday, Moore revealed what he would have said had his Oscar speech not been cut short.

“I encourage anyone watching at home tonight in the Gary, Indianas of America, in the Camden, New Jerseys, in the San Ysidros, in the East St. Louises and yes the Flints and Detroits and the Pontiacs and the Dearborns to pick up a camera and fight the power, make your voice heard and stop this senseless war. Thank you and good night,” read the rest of the speech.

Also Read: Michael Moore Says He 'Loves' Obama: 'May Not Have a Better President in My Lifetime' (Video)

Moore followed up that conclusion with some observations 15 years later, turning his criticism of Bush towards Donald Trump.

“Fifteen years later now tonight, we are not only still at war, but we have a president who has declared war on our democracy and war on us,” Moore said. “Keep picking up those cameras, everyone here in this room because the people gathered here tonight, you may be America’s last line of defense and hopefully the first line of rebuilding this country that he is currently destroying.”

Moore’s latest documentary, “Fahrenheit 11/9,” is one of 166 documentaries submitted for Oscar consideration. A shortlist of contenders for the Best Documentary Feature category will be released Dec. 17.