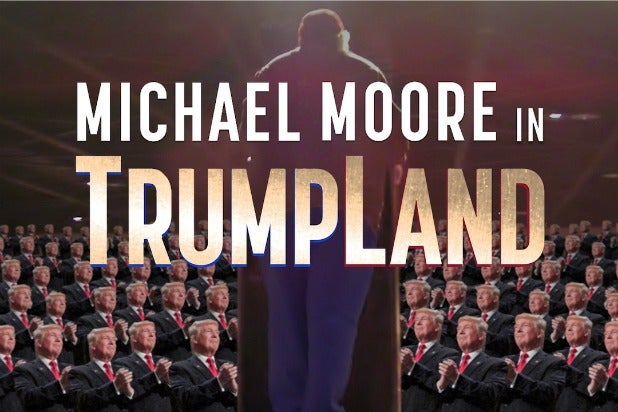 Tuesday night’s premiere of Michael Moore‘s “October surprise” documentary, “Michael Moore in Trumpland,” turned the street outside New York City’s IFC Center into a carnival fairway of sorts. There was an automated fortune-teller booth like the narrative shaper in “Big,” but with a red-eyed Donald Trump spewing fear-raising predictions and making demeaning comments about women. Nearby were vans that mixed political displays with games of skill, some bearing images that deserved to be knocked down with bean bags.

Hundreds of people were lined up to get free tickets to the 9:30 p.m. screening. Many who’d been waiting for four hours were turned away when the house reached capacity, but they’ll have another chance to see Moore’s film when it begins its week-long run Wednesday at the IFC Center and in Los Angeles at Laemmle Town Center 5 in Encino. Per Moore, “Trumpland” will soon be available on iTunes as well.

Before the screening, Moore told the audience he’d made the film in seven weeks and had locked it just hours before the premiere, which was decided upon a day in advance. He hadn’t slept in five weeks, and he was giddy just seeing it all come together. As for the film, it’s all Michael Moore: writer, director, and actor-lecturer-standup comedian.

Moore is always a compelling presence in his films, but this is the first time he’s put himself on stage, actually doing standup. And he does quite a good job of it, mixing his tricky wit and folksy humor with searingly salient commentary about the current presidential race and potent predictions about where, as he sees it, it’s leading our country.

“Michael Moore in Trumpland” is actually the cinematic adaptation of a one-man show Moore wrote for himself and performed twice in a theater in Wilmington, Ohio, a town with an overwhelming preponderance of pro-Trumpers.

The filmed audience, which attended both shows, was selected to represent a cross section of Americans — pro-Trump and pro-Clinton voters, women, millennials, whites, blacks and Mexicans – who were, as Moore announces in the film, segregated in a section of the balcony which had a faux wall constructed around it. Muslims, meanwhile, were also segregated in the balcony, with a drone flying over their heads to make sure they weren’t up to anything suspicious.

Yes, there’s Moore’s humor. And it has a winning way with viewers, as can be seen in reaction shots throughout Moore’s performance that show specific audience members gradually warming to his presentation.

Moore’s humor creates ground. Everybody in the filmed audience and the IFC Center audience laughed together, bridging the gap between the people on screen and in the house. That’s a rare accomplishment in cinema, even in acclaimed concert films or, on a more serious note, Al Gore’s successful one-man lecture “An Inconvenient Truth.”

Moore’s narrative cleverly covers a lot of ground, creating unusual synapses that connect issues in insightful ways. When commenting about gun control, for example, Moore points out that 3 percent of the U.S. population owns 50 percent of the guns in America, and that women — even those who own guns — have never been the perpetrators of mass killings in schools. The juxtaposition of thoughts is interesting and provocative. And it’s a not-so-subtle note of support for Hillary Clinton. As is the entire performance.

Add up the anecdotes, jokes, information and history, and you get all of the reasons why Moore urges voters to overcome anger, apathy, feelings of helplessness and their dislike for both candidates and vote for Hillary Clinton. His bottom line is that voting for Clinton is doing something good for your country, whether you like her or not.

With Moore in house for a post-screening Q&A, the premiere of “Michael Moore in Trumpland” turned into a political rally. Look for that at other screenings, too. Moore also plays both sides of the fence in a canny way, consistently slinging mud at the media for covering the scandalous aspects of the campaign, yet at the same time creating media events like the allegedly “impromptu” premiere of “Michael Moore in Trumpland” to support his own views and films.

In a post Q&A discussion, I asked him how he differentiated himself from the media that he so often scorns. His answer: “I am the antithesis of the media. They repeat the same s— day after day. I do not. They are corporate. I am not.”

The filmmaker understands the media game, and he plays it well, establishing his own authority in ways that convince others of point ov view. His is a different voice, and as expressed once again in “Michael Moore in Trumpland,” it is one that should be heard and considered.