The most polarizing filmmaker in American cinema, Michael Moore has waged war against the Establishment since his early days as editor of political journal, Mother Jones.

His latest movie, “Capitalism: A Love Story” exploring a system of government that he insists threatens the very life of our democracy and the very soul of our people, come out  Tuesday on DVD and Blu-ray. Moore sat down with TheWrap to talk about the moral and cultural demise of America.
You’re calling for the eradication of capitalism. Is it really that bad?

It’s rotten to its core. It’s amoral. It doesn’t have democratic principles attached to it.
You can’t gussy up something like that and make it nicer. What we can do, though, is to try to prevent the next crash, which is coming down the highway right now. The fact that we have not instituted a single rule or regulation on the banks or Wall Street is unconscionable. 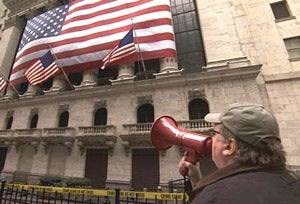 Do you think Wall Street knows that next one is on the way but hopes to ride the bubble as long as it can?
Yes. Six months ago, when I did these interviews for the film, I still had this shred of hope in me. It’s not there anymore.
They’re like reckless frat boys drunk at their party and using our money to buy the keg.
I swear to God, I truly believe that 100 years from now, if the planet’s still here, they’re not going to understand.
There are studies that show a higher ratio of sociopaths in the developed world, especially on Wall Street, where a person without a conscience is considered a greater asset.
That’s exactly correct. If you’re being interviewed down there, if they spot any sign of you having a conscience, you’re not getting the job.
Are these sociopathic tendencies contained on Wall Street or do they seep into the greater culture?
I think it permeates the culture. You see lots of signs of it, and they’re not really considered signs: “Oh, all the independent studios are closing up. Oh, that’s just business. That’s just the way things are.”
Really? Well, I think there’s a little more to it than that. I think it’s another sign of moving our means of expressing ourselves off the approved path. When that happens, when art is restricted, bit by bit it’s taken away from us.
You trace it back to the ’80s, when the corporations took over the studios.
That’s right. Take it back even to our schools, when they started cutting art and things like that. Instead of three school plays a year, there’s one. Film classes … those are long gone.
It seems we have more money and better technology than they did back in the ’30s and ’40s, but we can’t make movies of the same caliber.
You’ve hit the nail on the head. It’s not that people today lack talent or don’t know how to make movies like that — they’re not inclined to make movies like that. There’s something really rotten at our core. We have Oscar weekend here and I couldn’t, with good conscience, mark 1 through 10.
You couldn’t vote for “The Blind Side”?
I was watching that and I thought, “What does an African-American feel watching this movie?” And what do they think watching “Precious”? Friends that I’ve spoken to hate the fact that white people will be watching that movie.
I don’t want to dump on the movie. I work in an industry that has a subvert and overt racism at its core. How many black directors do we have in the DGA? How many African-Americans get to direct a Hollywood movie every year? 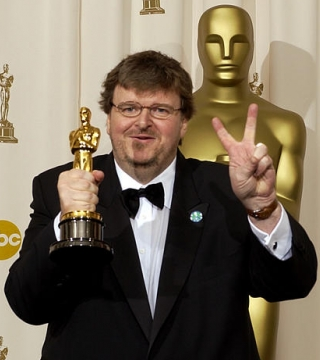 And women…
It took 120 years of filmmaking and 80 years of the Academy Awards for a woman to win Best Director.
Your speech at the Oscars back in 2003: “Shame on you, Mr. Bush!” Were you surprised that, in this town that’s often called a bastion of liberalism, there were boos in the audience?
You hear these boos, you don’t see anybody booing because there wasn’t anybody booing on the main floor. It was in the upper balcony. Sponsors take the sections, are given a block of tickets; some from agents and other people who work in the industry.
But look, we were on the fifth day of the war, and to have this big glam affair when we’re starting a war, how could you not say something?
And that night, I walked into the Governors’ Ball and all eyes turned to me, just glaring at me, like, “Dude, y’know, you ruined the night for everybody!”
Did no one support you?
Sherry Lansing saw me walk in the door and I’m just standing there alone and she made a beeline to me and came right up and gave me a big hug and thanked me for what I said. I’ll never forget that moment of her doing that.
Diane Lane was the presenter, and I remember seeing her later and I said to her, “I am so sorry I dragged you into my ordeal here.” And she said, “Are you kidding? This is historic! The fact that I got to be part of history, thank you!”
Yet in the end…
All these post-Oscar shows on the local stations were talking about me: “What a dumb thing!’’ “Why would he do that?” “He’s all done. He’s all washed up in this town.” I turned it off and I went to bed thinking, “I am done! That is it! That’s the last movie!”
But 14 months later I released “Fahrenheit 9/11.” So I clearly went back home and put my nose down and got to work and made my response to those boos.
You wanted to show them.
I wanted to make a movie that you can’t get it out of your head. That’s what we all strive for.