NBC won’t be without Michael Phelps on its Olympic airwaves after all. The decorated Olympian swimmer is joining the network’s coverage of the Tokyo Games, which begin on Friday.

Phelps previously joined NBC’s coverage of the U.S. Olympic Swimming Trials last month in Omaha. He’ll serve as a primetime correspondent on site in Tokyo and will be in the booth with Dan Hicks and Rowdy Gaines for certain competitions.

“From the moment he joined our team at Trials, Michael’s ability to provide insightful analysis, thoughtful commentary and tell entertaining stories was apparent,” Molly Solomon, executive producer and president of NBC Olympics Production, said. “We’re thrilled to have him join us in Tokyo and our audience will benefit from hearing the perspective of the most decorated Olympian of all time.” 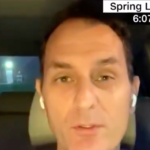 Phelps, of course, is the most decorated Olympian ever, with 28 total medals and 23 gold medals — more than anyone in history. During the 2008 Games in Beijing, Phelps won a record eight gold medals. This will be the first time since the 1996 Games in Atlanta that Phelps is not a competitor.

The Tokyo Games haven’t even started yet but have already been besieged by COVID-19 troubles. Not only is the Japanese city in a state of emergency, which will result in spectator-free environments, but athletes are starting to test positive for the virus.

Even so, the Opening Ceremonies are scheduled for Friday.