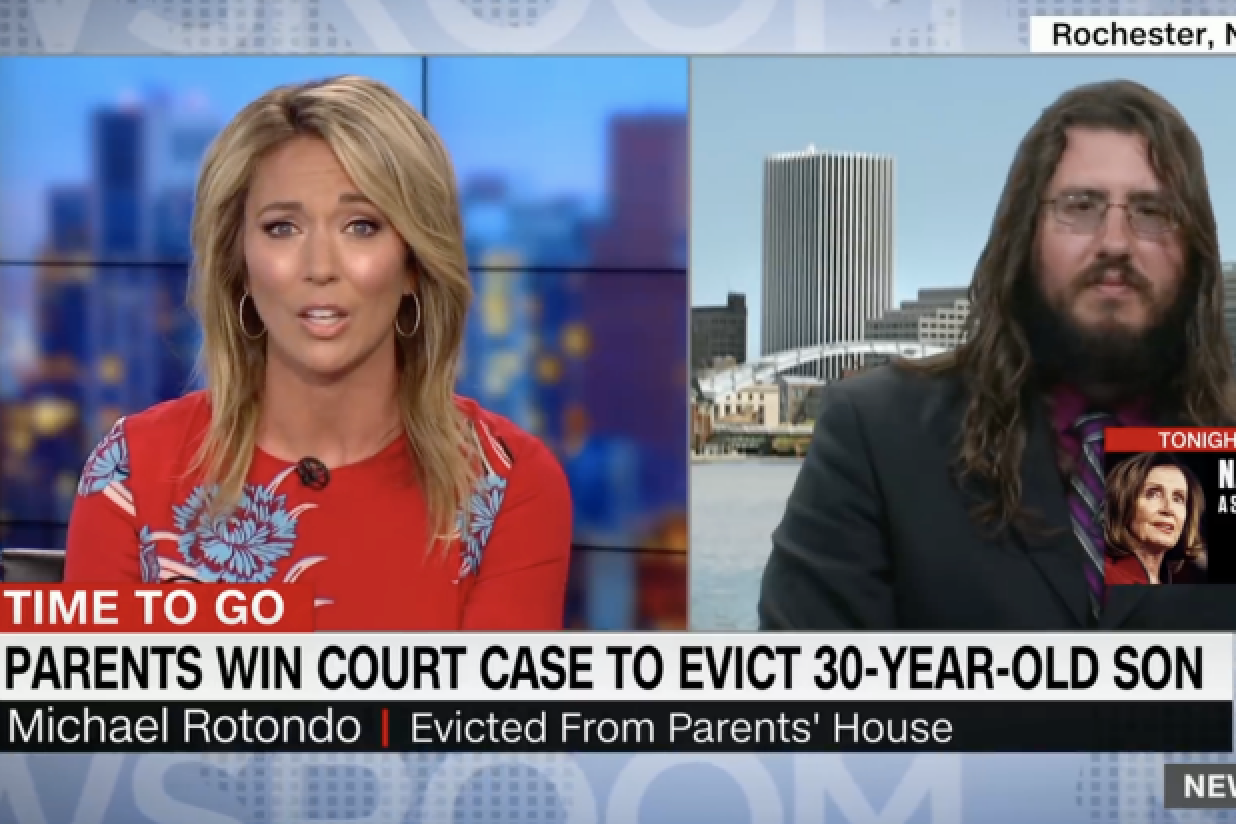 In May of this year, a 30-year-old man named Michael Rotondo got evicted — by his parents. He had lived with them for eight years, and when he refused to move out, they took him to court.

Then things got weirder. Rotondo’s eviction — and how it turned into a wildly unfair referendum on Millennials — is the subject of our new “Shoot This Now” podcast, which you can listen to on Apple or right here.

Every week on “Shoot This Now,” we talk about stories that should be made into movies. This week, we think Michael Rotondo’s story could be a great film — though maybe not the kind of film you’d expect.

Many people did not find Rotondo to be a sympathetic figure. The New York Post called him a “deadbeat,” “a freeloader” and an “unemployed millennial.”

Why did his unfortunate situation become a national — and even international — news story, covered by the Washington Post, CNN, and the BBC? Because he played into an unfair stereotype that Millennials are entitled and lazy. Other outlets also noted that he was a Millennial, without explaining why that was relevant to his odd situation.

On national television, CNN’s Brooke Baldwin asked Rotondo for his answer to a question she said many critics were asking: “What is up with this Millennial generation that you guys seem so entitled?’ What would you say to those critics?”

But as Peyser noted in her piece for Vice:

Complaints about millennial laziness and entitlement fail to take into account the financial burdens unique to the generation–the crippling student debt, the fact that the median income for people 25-34 is 20 percent less than it was in the 1980s, and the lack of the same high-paying job opportunities available to past generations. Census data also shows that as of 2017, almost one in five 25-to-34 year old men lived at their parents’ homes, while only 12.5 percent of women in the same demographic still resided with their parents.

In a conversation that spans the films of Richard Linklater, Adam McKay and Nicole Holofcener, we spend this episode of “Shoot This Now” talking about how cross-generational attacks distract from the real economic problems in this country. We mention crabs in a barrel a lot, and why the Haves profit so much from internecine fights between Have Nots. And we talk about a Gen X stereotype that is 100 percent true.

You can read Peyser’s piece in its entirety here.

Finally, here’s Michelle Singletary’s great financial advice for Millennials in the Washington Post, which we mention late in the podcast.

Please send any compliments to me at @TimAMolloy and any criticism to @MattDonnelly, or say whatever you need to say to both of us at @ShootThisNowPod.

And if you like this episode, don’t be shy about saying so on iTunes.

(Millennials, you can also listen on Spotify.)