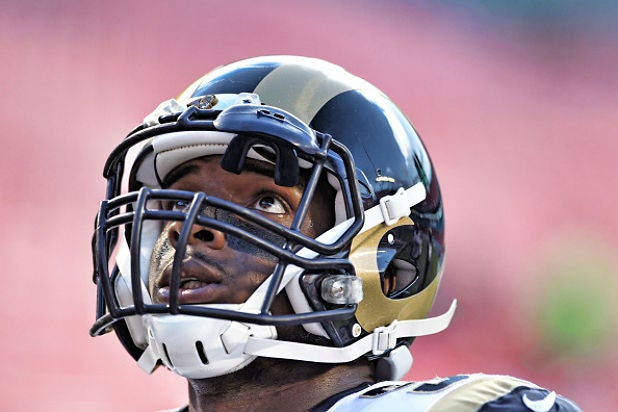 The Los Angeles Rams are going to be featured on HBO’s “Hard Knocks” this season, but the team may have gone to desperate lengths to avoid that distinction a few years ago — at least, according to one report.

In 2014, the then-St. Louis franchise drafted the first openly gay player into the NFL, defensive end Michael Sam. The move may not have been as progressive as it appeared, however, according to local sportswriter Howard Balzar.

“The league agreed not to ask the Rams to appear that year on HBO’s yearly summer series ‘Hard Knocks’ if they drafted Sam,” he alleged Wednesday on 590thefan.com.

There are guidelines for team selection, but ultimately the National Football League can designate a qualifying squad. St. Louis made the criteria that season, but didn’t get picked for the show.

Sam ultimately didn’t make the squad, and the team didn’t waste too much in the process, as the University of Missouri standout was picked in the final round of the NFL Draft. Plus, the Rams ended up getting the guy Balzar believes they really had their sites set on for that spot anyway — Ethan Westbrooks. That part of the theory goes pretty deep. We suggest you read Balzar’s final paragraphs directly to go down the wormhole.

For now:
“As the draft proceeded on the final day, it appeared he might not be drafted at all,” Balzar penned. “It is believed the NFL didn’t want to face questions about that eventuality, and the Rams were viewed as the ideal spot because of St. Louis’ proximity to the Missouri campus in Columbia, 90 miles away, and head coach Jeff Fisher’s ability to deal with whatever distractions there might be.”

“So it was that the Rams saved the day, selecting Sam with the 249th pick of a 256-player draft,” he continued, citing multiple anonymous sources.

“It’s 100 percent incorrect,” he stated strongly. “I was really taken back by those comments. It’s insulting, from my standpoint, as it relates to Michael. We had three seventh-round picks, we drafted Michael — he was the best player on the board.”

Fisher added: “Who in their right mind would think that you would give up a draft choice to avoid doing something like that, something that would benefit the organization?”

Of course, Fisher in 2014 had expressed a desire to have nothing to do with “Hard Knocks,” something he is suddenly embracing two years later.

“He worked so hard to try to make this football team,” Fisher continued. “Obviously, we had a good defensive line. But, really not fair to Michael because of all the work he put it in as well.”

Sam ended up having a cup of coffee with the Dallas Cowboys, before ultimately ending up in a subpar Canadian league.

Sam himself seems to think such a purported deal could have happened, however.

“I’m not surprised at all,” he responded on Twitter to Balzar’s story.

I'm not surprised at all https://t.co/wGnyFpuIVP

The NFL had no comment beyond pointing TheWrap to Fisher’s remarks.