Michael Seligman, who to nobody’s surprise was named supervising producer of the 82nd Academy Awards on Thursday, has a lengthy and colorful history with the Oscar show, which he’ll be working on for the 33rd time.

He’s the Oscar moneyman, but he also helped create and assemble the legendary Oscar gift baskets until they got too big and elaborate to squeeze in with all his other duties.

He negotiates contracts and budgets the show — but the year that Mel Gibson’s "The Passion of the Christ" was the big movie, he was also the one who talked producer Joe Roth out of his idea to have host Billy Crystal reach the stage by being carried on a cross through the orchestra section of the Kodak Theater.  (At least that’s what Roth says.) 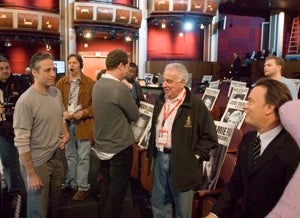 He handles insurance and logistics and almost everything else on the business side, but he also chauffeured Allan Carr around town when the flashy showman was producing the Oscar show in 1989, and he was the only one Madonna wanted to deal with when she sang a "Dick Tracy" song on the show two years later.

Incidentally, neither of those gigs ended well: the rotund Carr proved to be such a rough passenger that Seligman had to replace the front seat of his Mercedes after the show, while Madonna had a tantrum of epic proportions when the technician responsible for making her popup microphone pop up fell asleep in the middle of the Oscar telecast.

But Seligman has survived those troubles and many more: bears and horses and malfunctioning props and temperamental stars and Cirque du Soleil setting the stage on fire.  And now he’s back, an old hand ready to deal with a pair of rookie producers in Bill Mechanic and Adam Shankman.  In the press release announcing Seligman’s appointment, Shankman promised to "lovingly torture" his supervising producer.   I suspect Shankman will have a hard time throwing anything Seligman’s way that the vet hasn’t seen before.