Smerconish has been filling in this week since regular anchor Chris Cuomo was fired over the weekend. Monday, Tuesday and Wednesday, he beat Don Lemon and Anderson Cooper, the network’s other two primetime hosts, in the advertiser-coveted age demographic of viewers from 25 to 54, according to Nielsen Media Research ratings data. On Wednesday, he had the highest demo numbers on the channel, pulling in an average of 184,000 viewers in that age range. 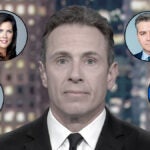 Smerconish, who served in the Department of Housing and Urban Development under former president George H. W. Bush before launching a media career, hosts his own show on the channel Saturdays at 9 a.m.

The extension comes as speculation around Cuomo’s permanent replacement increases. Cuomo was fired Saturday amid an investigation into his involvement in advising his brother, former New York Gov. Andrew Cuomo, during the onslaught of sexual harassment accusations against the politician. He was suspended by CNN last week as the network undertook an investigation.