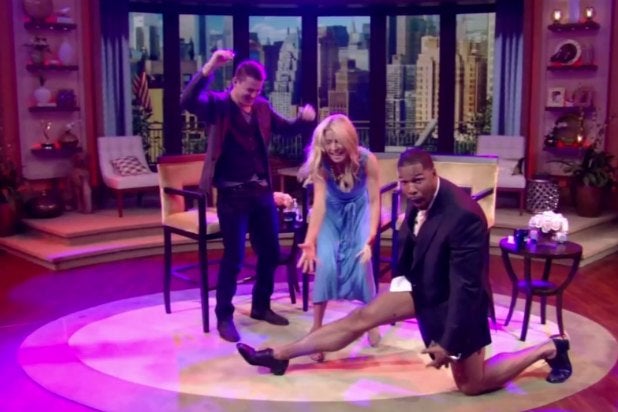 A screen shot from "Live With Kelly and Michael" on September 29, 2014. Credit Disney-ABC Domestic Television

Michael Strahan revealed on Monday that he’ll be featured in “Magic Mike XXL.” He confirmed the news on “Live with Kelly and Michael,” and admitted he has work to do to get in shape for the male stripper sequel.

Also read: Fan Who Threatened to Kill Michael Strahan Rants in Court: My Lawyer Is Illuminati

Channing Tatum, who produced and starred in “Magic Mike,” offered Strahan a role in the film’s sequel during two previous appearances on “Live.” On Monday, Strahan told co-host Kelly Ripa that he will indeed be wearing very little for the part.

Joining Tatum and Strahan are Matt Bomer and Joe Manganiello, who will all reprise their roles from the original movie. As TheWrap previously reported, Matthew McConaughey will not return for the sequel.

In addition to co-hosting “Live with Kelly and Michael,” Strahan joined “Good Morning America” in 2014 as an anchor and contributor to the morning news program.

Watch Michael Strahan confirming his role in the video below.