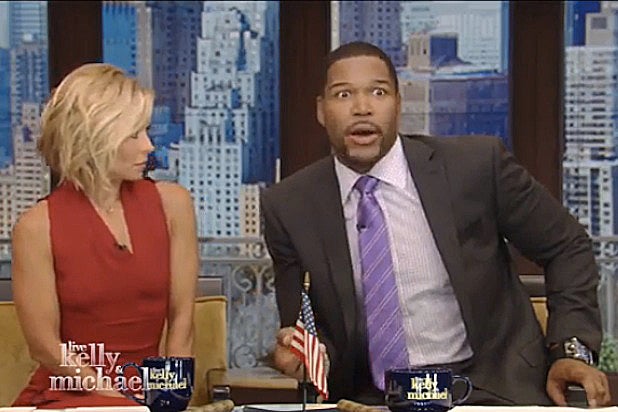 It seems like everyone loves Michael Strahan — well, maybe not Kelly Ripa. (But that’s another story, one you can actually read right here.)

How do we know this? Strahan’s Positive Q Score — a measurement used in the entertainment industry to assess a celebrity’s likability — is a 21, TheWrap has learned, which is five points higher than the average host studied. Meanwhile, Ripa’s clocks in at just a 13.

That was the “Live” producers panicking.

Ripa only charts in above-average among women 50 and older. That’s nice and all, but it’s not the main demographic that sponsors are looking for. Worse-yet, females 18-49 seem to dislike her — Ripa recently pulled in just an 8 Positive Q Score from that age/sex group.

Meanwhile, Strahan only drops beneath a 20 among women 18-49 — and even there he still scores a nice 19.

Of course, Ripa has her strengths. For starters, she’s generally better-known than the ex-New York Giants great, which is also quantified by Henry Schafer’s Q Scores company. Ripa is recognized by 62 percent of the total population, while Strahan’s familiarity score is a 45. Both are well-above the average host’s score of 32 percent.

Here’s how Q Scores surveys work: Schafer’s team provides a celebrity’s name and a brief description to more than 1,800 study participants. The viewers are asked if they recognize the person and how they feel about him or her. Schafer’s clients include talent agencies, movie studios, TV networks, etc.

“So, Michael Strahan‘s presence will be sorely missed — not only with respect to his stronger overall appeal, but importantly with the stronger emotional connection he has with men and younger women,” Schafer summed up for TheWrap.

It was announced earlier this week that Strahan is leaving “Live With Kelly and Michael” for a full-time “Good Morning America” co-anchor chair starting in September.