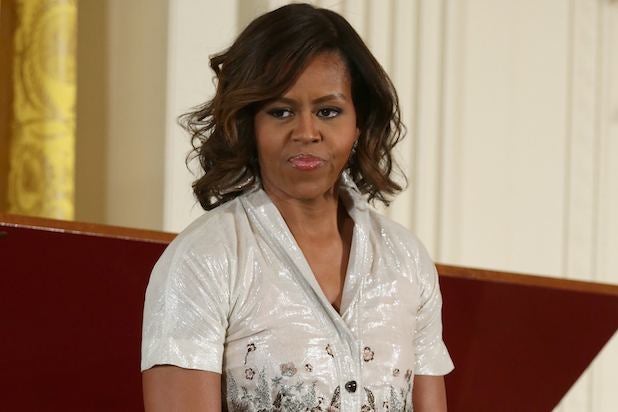 Four years after launching her “Let’s Move!” initiative to reduce childhood obesity, Michelle Obama has seen “glimmers of progress,” but worries Congress and potatoes might destroy it.

The first lady wrote an op-ed for the New York Times, which warns of two ways federal legislators are attempting to undermine her efforts to curb health issues, like diabetes, that are expected to plague Americans during their lifetime.

“Take, for example, what’s going on now with the Women, Infants and Children program, known as WIC. This is a federal program designed to provide supplemental nutrition to low-income women and their babies and toddlers,” Obama wrote. “Right now, the House of Representatives is considering a bill to override science by mandating that white potatoes be included on the list of foods that women can purchase using WIC dollars. Now, there is nothing wrong with potatoes. The problem is that many women and children already consume enough potatoes and not enough of the nutrient-dense fruits and vegetables they need.”

With 90 percent of schools reporting that they are meeting the new school lunch standards passed in 2010 —  more fruits, vegetables and whole grains, based on recommendations from the Institute of Medicine — the first lady says members of Congress are also trying to “roll back” progress when the House Appropriations Committee takes up the annual spending bill for the Agriculture Department on Thursday.

“They want to make it optional, not mandatory, for schools to serve fruits and vegetables to our kids. They also want to allow more sodium and fewer whole grains than recommended into school lunches,” Obama wrote. “Remember a few years ago when Congress declared that the sauce on a slice of pizza should count as a vegetable in school lunches? You don’t have to be a nutritionist to know that this doesn’t make much sense.”

While Obama says data proves federal efforts against childhood obesity are working, as the obesity rate amongst 2-5-year-old children dropped 43 percent over the past decade, there is still a terrifying future in sight.

“We already spend an estimated $190 billion a year treating obesity-related conditions. Just think about what those numbers will look like in a decade or two if we don’t start solving this problem now,” Obama concluded. “The bottom line is very simple: As parents, we always put our children’s interests first… And when we make decisions about our kids’ health, we rely on doctors and experts who can give us accurate information based on sound science. Our leaders in Washington should do the same.”