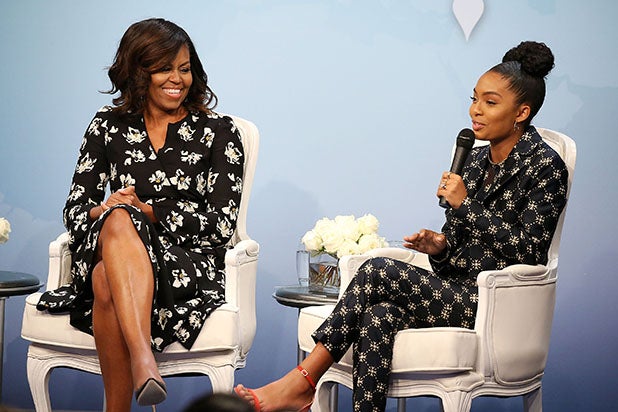 “Black-ish” star Yara Shahidi has one major advantage over other students when it comes to her college applications.

In an interview for W Magazine, the ABC star revealed that she included a letter of recommendation from former First Lady Michelle Obama in her application to such schools as Barnard, Brown, New York University and Harvard.

“She is very amazing and such a supporter, which is something very surreal to say,” Shahidi told the magazine. She plans to double-major in African American studies and sociology.

The actress, who plays the eldest daughter to Tracee Ellis Ross and Anthony Anderson on the ABC family comedy, also received “a ‘go get ‘em, tiger’ back-rub” from Obama before taking her AP exams.

Obama and Shahidi appeared on a Glamour Magazine panel together last October for International Day of the Girl. The duo sat down with Glamour Editor-in-Chief Cindi Leive to discuss “the importance of girls’ education.”

Shahidi most recently appeared on a panel about diversity in media alongside “Jane the Virgin” star Gina Rodriguez at the South By Southwest film festival in Austin, Texas.

Remembering Obama by the things he watched, from “The Godfather” to “Game of Thrones”