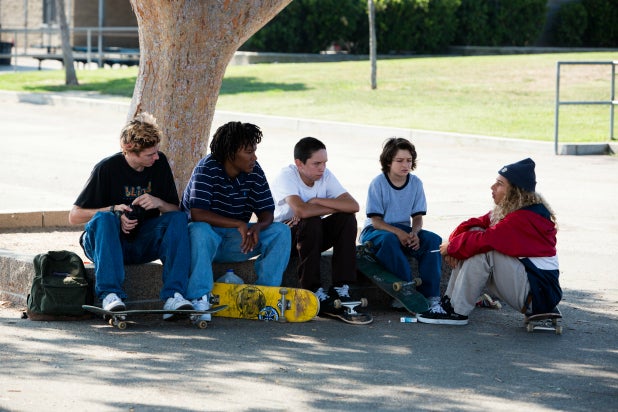 Jonah Hill’s directorial debut is an homage so faithful to its titular era, you’d be hard-pressed to pinpoint the year in which it was actually made. The giveaway, though, is in the intense sense of nostalgia that suffuses every frame of “Mid90s.”

Hill, currently starring in Netflix’s “Maniac,” was 13 in 1996, the same age as his protagonist, Stevie (Sunny Suljic, “The House with a Clock in Its Walls”), who’s struggling to make sense of his unhappy life. His older brother, Ian (a scary Lucas Hedges, miles away from “Lady Bird”), has a lot of rage issues, most of which he takes out on Stevie in violent fashion. And his young single mom, Dabney (Katherine Waterston, “Inherent Vice’), is just trying to hold things together.

Facing down a summer with nothing to do and no one to do it with, Stevie finds a new family among the teens who hang out at a nearby L.A. skate shop. Ray (Na-kel Smith) works there, but he seems to be the only one with a job or plans for the future: He wants to emulate his idols and snag a sponsorship. Fourth Grade (Ryder McLaughlin, “Ballers”) has vague dreams of becoming a filmmaker, but then again his nickname reflects his general level of intellectual ability. Ruben (Gio Galicia) is the other “little man,” a kid trying to keep up in a world of intimidating teenagers like Fuckshit (Olan Prenatt), whose nickname pretty much says it all.

Watch Video: Jonah Hill Takes Us Back to the 'Mid90s' in First Trailer for Directorial Debut

Ruben gives a wide-eyed Stevie his first cigarette the day he walks into the store, and it’s not long before he’s swallowing pills, chugging 40s and following older girls into their bedrooms for bragging rights. Hill envisions these endless days with a kid’s-eye abstraction that’s both timeless and firmly entrenched in its own era: his skate punks banter like Kevin Smith extras, wander like Richard Linklater dreamers, and misbehave like Larry Clark lost boys.

But like a teen trying out adulthood, Hill seems ready to acknowledge consequences without actually wanting to face them. We get brief, impactful hints at the depths of Stevie’s self-destructive pain, but eventually the script considers them too much of a downer to resolve. And depending on one’s age, the bluntly unrealistic final scene could be read as either wish fulfillment or a cop-out.

Even if they don’t ultimately cohere, though, each individual moment is beautifully played. While it’s a longstanding joke that all actors really want to direct, many of them do have a distinct advantage. Hill exhibits a striking confidence behind the camera, reflected in part through his low-key approach. He cast his movie mostly with amateur skaters, and he draws flawlessly natural performances from every one of them.

He’s also gone out of his way, as sole screenwriter, to give us a chance to get to know the characters intimately. Prenatt shows us the vulnerability beneath his burnout’s hard-partying persona, while Smith is so charismatic we fear Ray may prove too good for this world. McLaughlin and Galicia convincingly portray the hesitancy and resentment of those destined to remain on the edge of any group, and Suljic gives us the sort of heart-wrenching honesty only children can; the last performance this powerfully authentic was from little Brooklynn Prince, in last year’s similarly evocative “The Florida Project.” (Both films come from impressive indie shingle A24.)

Hedges, an Oscar nominee for “Manchester by the Sea,” once again proves particularly adept at filling in silence; Ian’s quiet anger says just as much as his explosive furies. Waterston’s Dabney, unfortunately, remains frustratingly elusive — not so much because kids don’t know what their parents get up to, but because the script never makes room for her. She’s neither present nor absent enough to provide the extra clues we need into Stevie’s lightning-fast transformation.

But that transformation is undeniably potent, whether Stevie is limiting his options in show-offy drunkenness or embracing exhilarating freedom while skateboarding through crowded car lanes. The parallel soundtrack — Pixies, Cypress Hill, Nirvana — backs him up in every life-altering moment, and the eternal languor of so much summer downtime is captured in all its hazy revelation by superb cinematographer Christopher Blauvelt (“Meek’s Cutoff”). Just as Hill makes the most of his first-time actors, he relies on experts to help build the film around them: longtime collaborators Trent Reznor and Atticus Ross handle the score, while costume designer Heidi Bivins (“Spring Breakers”) gets the slouchy skate rat uniform down to a T — usually one featuring Ren & Stimpy or a Street Fighter II logo.

Hill’s made an unabashed love letter to a particular decade, sure, but also to a specific moment in everyone’s life. And while he undercuts his own movie by romanticizing even the most extreme experiences of lost innocence, the purity of Stevie’s longing makes the movie’s wistful fantasy understandable.