Michael Nash set out to make a non-partisan movie about a highly politicized subject.  And that fact hasn’t always made life easy for his film, “Climate Refugees.”

The documentary, which the Los Angeles Film Festival is presenting in a free outdoor screening Friday night at the California Plaza in downtown L.A., takes a global look at the victims of climate change – but it studiously avoids getting into the debate over whether global warming is caused by man, which has become a hot-button political issue in the United States. 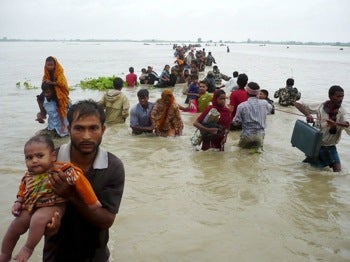 “When we drive through an intersection and there’s a horrific automobile accident where people are lying on the street, the first thing we’re supposed to do as humanitarians is take care of those people,” says Nash.  “Then we’ll figure out who caused the accident.

“But in America, we’ve done exactly the opposite on climate change. We’ve gotten so caught up on who’s causing it that we’re not looking at the effects of it.”

Those effects, he says, include 25 million “climate refugees” around the world currently, with a possible 50 million within a few years.

“There seems to be an intersection where overpopulation, overconsumption, lack of resources and a changing climate are all colliding with reach other,” he says.  “And out of this collision, more and more people are being forced to leave the land that they live on because they’re running out of resources.

“They’re going to start crossing borders – and as they cross those borders, conflicts are going to arise.”

In trying to spread that message, Nash has been supported, and attacked, by both the right (which he says often dismisses the issue by saying that the change isn’t caused by man, “as if that’s the solution to the problem”) and the left (which takes exception to his support for incentives rather than penalties like the “carbon tax”).

The film includes interviews across the political spectrum, from Nancy Pelosi to Newt Gingrich.  But in distributing it, Nash says he’s been careful not to seem allied with any of those who’ve politicized the issue – after all, “An Inconvenient Truth” might have won an Oscar, but it also was universally dismissed by many who didn’t share Al Gore’s politics.

Nash turned down Greenpeace, for instance, when that group wanted to do screenings of the film.  He’s preparing a 30-minute version for churches and faith-based organizations who’ve approached him, but he declined to specifically target those screenings in places where the left is hoping to make political progress.

“It’s not that I don’t support what Greenpeace is doing, but there are folks who consider them radical and would dismiss the film if it were tied to Greenpeace,” he says.  “We have postponed things, or not done them, in order to keep this film clearly in the middle.  Because we’re getting nowhere by pointing fingers.”

That said, Nash thinks that even the right ought to realize that it’s in everybody’s best interests to work as if climate change is a man-made problem.

“At one point, as we were traveling around the world documenting all this destruction and migration, we were all sitting around a dinner table talking about what would be worse, if man was causing this or if this was cyclical,” he says.  “And we all came to the conclusion that we’d probably be much better off if man is causing this – because if he isn’t causing this, we can’t fix it.”

“Climate Refugees” was filmed over the course of three years in about 40 countries around the world, with the filmmakers looking for what Nash calls “the human face of climate change.”  Shooting the film, Nash says he came to the conclusion that concerted action could make significant progress on the issue, which has the potential to become a huge national security problem.

Nash plans to take the film to college campuses after the LAFF screening, which takes place at 8:15 Friday night and will also include musical performances and a post-screening Q&A.   California Plaza is located at 350 S. Grand Ave. in downtown Los Angeles.