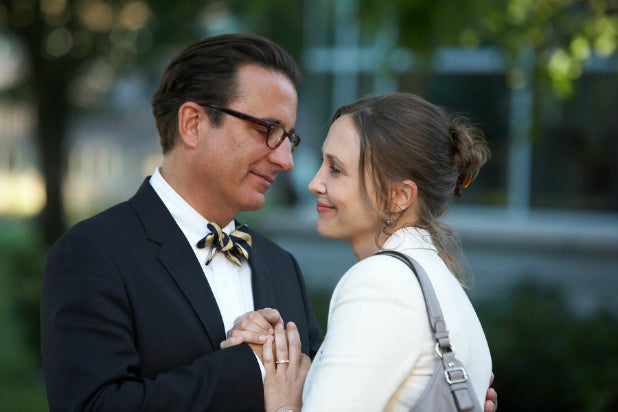 Love stories sometimes try to woo us the way that actual lovers do — they pour on the charm, the wit, the flirting, and in this early stage it’s easy to be dazzled. Whether or not the relationship takes can be determined only later, once we’re worked our way past the original façade and found out what lies underneath.

“At Middleton” gives a hell of a first impression, what with Andy Garcia and Vera Farmiga giving crazy amounts of chemistry as mismatched parents getting to know each other while touring a college campus with their respective children. But the deeper we delve into the screenplay by Glenn German and director Adam Rodgers, the more obvious it becomes that there’s not much going on under the surface.

Both parents had hoped the trip would be a bonding experience with their kids who will soon be leaving the nest, but the two wind up getting separated from the group, and as they explore the grounds, their initial antipathy winds up giving way to stronger feelings.

Rodgers is clearly going for a breezy French vibe here, something that’s apparent long before George and Edith stumble into a projection booth where “The Umbrellas of Cherbourg” is being screened. Whether they’re zipping down pathways on stolen bikes or grabbing each other’s arms to run off to their next destination, George and Edith are constantly being framed as though the director were trying to recreate the one-sheet for “Cousin, Cousine,” all to the accompaniment of Arturo Sandoval’s Georges Delerue­-influenced score.

As the day progresses, and all four major characters learn life lessons and break down the fundamental self-delusions of their lives, however, the movie starts seeming more and more like a freshman writing exercise that needs a lot more drafts.

Pity, because the cast (which also includes Peter Riegert as a grizzled campus-radio vet and Tom Skerritt as a distinguished professor) gives this trifle all they’ve got, and they all deserve better. Andy Garcia and Vera Farmiga, in particular, offer up the kind of rapport that merits revisiting.

I vote for casting them both in a remake of “Hart to Hart” once Farmiga has fulfilled her “Bates Motel” duties, but really, any script that allows them to be smart and sexy but also offers three strong acts would be just fine.