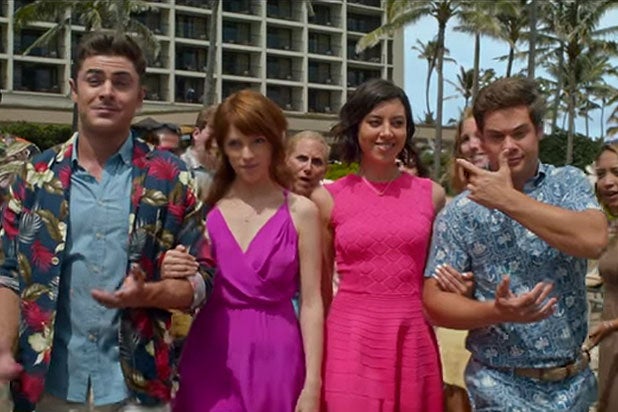 Critics are torn over “Mike and Dave Need Wedding Dates.” Is it a comedy that “crashed and burned”? Is it a movie that is “worth committing to”?

Needless to say, the film, which opens on Friday, has a middle-of-the-road 52 percent rating on Rotten Tomatoes.

Filled with loud and raunchy bro humor, “Mike and Dave” is actually based on a true story of two brothers who listed an ad on Craigslist looking for dates to a family wedding.

While the real brothers ended up going to the wedding with women they already knew, their movie versions, played by Zac Efron and Adam Devine, get more than they bargained for.

Two wild women, Tatiana and Alice, played by Aubrey Plaza and Anna Kendrick, respond to the ad pretending to be good wholesome girls just to get a free trip to Hawaii.

“A temper tantrum of a comedy, ‘Mike and Dave Need Wedding Dates’ makes a lot of noise trying to get what it wants, but laughs here are as non-existent as an exasperated parent’s smile in the face of a screaming toddler,” wrote TheWrap’s Robert Abele. “‘Mike and Dave’ is more likely to tarnish its cast’s comedy-chops goodwill than to foster a desire to see any more raunch-till-you-drop yukfests.”

Read eight other reviews below.

Boston Globe, Ty Burr
“This is the feature directing debut for Jake Szymanski (after dozens of shorts for FunnyorDie.com), and it shows: ‘Mike and Dave Need Wedding Dates’ lopes along with bumptious likability but no real energy, urgency, structure, or wit. And for all of Tatiana and Alice’s transgressive behavior — ooh, look, they’re as crude as guys can be — the script makes sure they’re good and tamed by the end.”

New York Daily News, Edward Douglas
“As dumb as ‘Mike and Dave’ can get, it’s a surprisingly fun summer comedy and icing on the (wedding) cake for fans of the raunchiest of humor.”

Seattle Times, Moira Macdonald
“Director Jake Szymanski appears to have watched ‘Wedding Crashers,’ ‘The Hangover’ and ‘Bridesmaids’ carefully, coming up with a movie that’s similar to them yet not as good. You’ve seen this cheery, slapdash blend of raunch, cocktails and summer dresses before. Efron and Devine agreeably yell most of their lines. Kendrick and Plaza intone theirs in goofy deadpan, and the story unfolds like … wait, there’s no actual story here, just an incident stretched out. Getting a laugh or two, with a talented cast, is easy; making a good movie, it turns out, is haaaard.”

Newark Star Ledger, Stephen Whitty
“‘Mike and Dave Need Wedding Dates’ has a couple of good laughs, an unabashed view of female sexuality and at least avoids the usual bodily function jokes. Plaza is terrific, and the Hawaiian locations are lovely (and more convincing than the pseudo New York ones). But for a movie about a wedding, it still feels like a rehearsal.”

Also Read: Adam Devine on His Transition From Selling Steaks to Starring in 'The Intern' With Robert De Niro

A.V. Club, Jesse Hassenger
“The frenetic verbal humor bouncing off all of the self-reflection over who the characters are hurting with their various codependent shenanigans produces something like a millennial echo chamber, complete with ‘Jurassic Park’ and Ninja Turtles references. This might well sound like a nightmare to non-millennial non-bros. But there’s something liberating about a comedy where all four central characters f— up with such youthful bravado. A more focused comedy might have treated the opening contrast as an inspired jumping-off point rather than a general theme — and crafted more jokes that linger, rather than dissipating as soon as they land. But ‘Mike and Dave’s’ crudeness of form and content is, in its own way, likably expressive.”

US Weekly, Mara Reinstein
“The four lead characters have fewer brain cells than a guppy in the Pacific Ocean. It’s not a contest. One of them thinks a hedge fund is a fund with hedges. And yet … these idiots are funny. Laugh-a-minute funny. And you’ll be more than happy to go along with them in this featherweight, often-uproarious comedy (which, according to the prologue, is ‘based on a true story … sort of’).”

Paste Magazine, Kenji Fujishima
“The best way to enjoy ‘Mike and Dave Need Wedding Dates,’ then, is as a shaggy series of comic episodes pitting four wildly different performance styles against each other. Seeing Zac Efron‘s blandness, Adam Devine‘s hyperactivity, Anna Kendrick‘s perkiness and Aubrey Plaza‘s deadpan occupying the same frames does offer some incidental pleasures beyond the vigorous raunchiness, and one’s response to this film may well depend on how willing you are to hang out with these performers as they riff. If only the filmmakers had lavished as much thought on giving these actors actual characters to play.”

Film Journal International, Nick Schager
“Aside from its general sloppiness, replete with multiple storylines that are ignored almost as soon as they’re introduced, ‘Mike and Dave Need Wedding Dates” biggest flaw is that it relegates Zac Efron to a straight-man afterthought. Given his recent, sterling comedic work in the ‘Neighbors’ films, Efron’s second-banana status comes across as something of a missed opportunity. Nonetheless, even as it squanders its one true movie star — as well as burdens Kendrick with a role that uneasily straddles the line between out-of-control vixen and sentimental softie — the film proves a splendid showcase for Devine, whose mixture of immature arrogance, pathetic nerdiness and general weirdness is inspired. Moreover, he’s ably matched by a fiercely uninhibited, narcissistic Plaza, who struts about the screen with such cocksure confidence, it’s no wonder that the proceedings end with a gag in which, during sex, she assumes the dominant position.”