A temper tantrum of a comedy, “Mike and Dave Need Wedding Dates” makes a lot of noise trying to get what it wants, but laughs here are as non-existent as an exasperated parent’s smile in the face of a screaming toddler. Built on a shaky comic premise based on a real Craigslist ad posted by a pair of party animals — and smacked to life with relentlessly feeble, dopey improvisation and unoriginal crudity — “Mike and Dave” is more likely to tarnish its cast’s comedy-chops goodwill than to foster a desire to see any more raunch-till-you-drop yukfests.

A slickly filmed slo-mo credit sequence shows sibling alcohol salesmen Mike (Adam Devine) and Dave Stangle (Zac Efron) as life-of-the-wingding revelers who can turn any family get-together into a people-pleasing affair with trampolines, fireworks and costumes. But when their parents (Stephen Root and Stephanie Faracy), soon-to-be-married sister Jeanie (Sugar Lyn Beard) and her fiancé Eric (Sam Richardson) show up at their city pad with a stern warning that they must bring dates to Jeanie’s wedding in Hawaii, the brothers act shocked until they’re shown footage of their prior antics.

It’s a nifty bait-and-switch gag: The opening montage had been fantasy, while the home video truth is that Mike and Dave routinely show up stag, get drunk, harass women, wreak havoc and piss off everyone. (It’s also an unfortunately ironic metaphor for what the movie eventually does as well.)

That the solution is forcing these loose-cannon hedonists to bring “respectable” dates is flimsy enough. How would that ensure decorum, exactly? That their big-idea viral ad offering two nice girls an all-expenses-paid travel date leads to so many terrible auditioners (the inevitable bad-meet montage of the weird, the weirder and the not-female) is a stretch. That the two they get excited about — Alice and Tatiana, a pair of debauched waitresses pretending to be respectable career women, and played by Anna Kendrick and Aubrey Plaza — can’t be seen for the scheming, immature trainwrecks they are, is one leap too many. 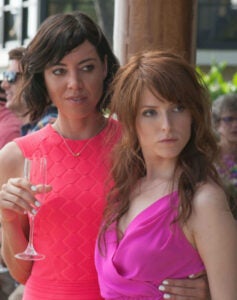 Plenty of going-wrong comedies have been built on less, but nothing in the screenplay by Andrew J. Cohen and Brendan O’Brien (“Neighbors,” “Neighbors 2: Sorority Rising”) suggests that anyone cared even a little bit about whether the set-up made any sense before the rude humor freight train left the station.

And the crass-gag pileup is a well-worn one: insults, pain and sexual shenanigans. In the “Jurassic Park” hills of Hawaii, the bride gets hit in the kisser by an airborne ATV tire, which plays as an excuse for everyone to make fun of her face. Meanwhile, sex or references to sex — wanted, unwanted, obliged, unforeseen, taboo — is everything to a movie like this, aimed as it is at the most juvenile of gigglers. When Kendrick’s Alice, feeling sorry about the bride’s accident, pays a masseuse (Kumail Nanjiani) to give the unsuspecting Jeanie an extra level of attention, it becomes an oiled, naked, happy-ending joke with too many endings, none of them funny. It’s the kind of movie in which stoned characters in proximity to a corral of horses is enough to induce shivers. (Thankfully, nothing untoward happens.)

Mostly, though, it’s the lame ad-libbing — you can always see it coming, too, as when the bride reveals her scarred face — that really suggests the improvisation crutch has become the comedy endurance-sport equivalent to the bloated, non-stop CGI action that vacuums the thrills out of a summer blockbuster. Where winging it once felt like the seasoning in an absurdist Will Ferrell/Adam McKay movie or a bittersweet Judd Apatow romantic comedy, now it’s the bland entrée.

Characters don’t say dialogue that moves anything forward in these movies, they spit off-the-cuff lines, beat jokes into the ground and fill gaps with shrieking (especially the little-goes-a-long-way Devine). Under the rudderless direction of Jay Szymanski (HBO’s “7 Days in Hell”), all the improv renders any potentially viable comic situations tension-free and makes editing rhythms moot. (A moratorium on “You look like [ad-lib]” and “[blank] is my bitch” would be a good start.)

The cast members are already veterans of this type of thing, but in Efron’s case, he’s never seemed blander, sidelined comedically by the huffing and puffing Devine and barely interested in the rubberstamped spark meant to bring Dave and Alice together. Kendrick, meanwhile, waffles between making the once-jilted-at-the-altar Alice a pinwheel-eyed loon or a wounded romantic. (Then again, Alice is hardly a character to begin with.)

Only “Parks & Recreation” alum Plaza offers the occasionally pleasurable deadpan impishness, but the primary takeaway is that she’s been to this well one too many times. On the supporting front, Alice Wetterlund gamely plays a butch Stangle cousin who macks on Tatiana, but again, she seems to exist only so she can be called a “bisexual Fonzie,” serve as an antagonist to Mike and initiate a coarse, witless bit in a sauna.

Like nearly every movie with a nuptial-themed title, “Mike and Dave Need Wedding Dates” ends with a ceremony, and a rigged stab at character happiness. But the party vibe isn’t contagious, unless the signal that the dumbness has reached an end brings a welcome, finally earned sense of relief.