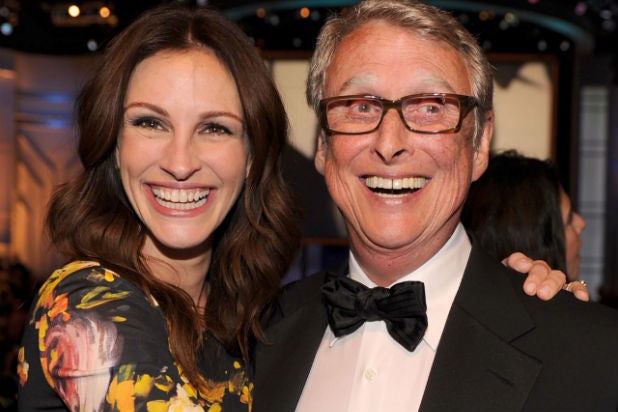 Hollywood and the media woke up Thursday morning to the sad news that legendary film director Mike Nichols died at the age of 83. The Emmy, Oscar, Tony and Grammy winner went into cardiac arrest Wednesday evening. News of his passing prompted many who knew him to share their fond memories of Nichols.

“Mike was a friend, a muse, a mentor, one of America’s all-time greatest film and stage directors, and one of the most generous people I have ever known. For me, ‘The Graduate’ was life-altering — both as an experience at the movies as well as a master class about how to stage a scene. Mike had a brilliant cinematic eye and uncanny hearing for keeping scenes ironic and real. Actors never gave him less than their personal best — and then Mike would get from them even more. And in a room full of people, Mike was always the center of gravity. This is a seismic loss.”

See video: 'GMA' Remembers Mike Nichols: 'We are Thinking of Diane This Morning'

“Good Morning America” paid special tribute to Nichols, who was married to long-time “GMA” anchor Diane Sawyer. Robin Roberts said of the couple: “They were an incredible and beautiful love story. Diane and Mike enjoyed entertaining and, when you were in their home, you often ended up on the floor and you’re looking up at Mike, his humor, his intellect, the stories. And I would watch Diane watching Mike and she would always say to me, ‘That’s my guy.'”

The anchors of “CBS This Morning” also paused to remember Nichols on Thursday. Gayle King said: “Our first thoughts of course are with Diane. You know when we first got the news and everybody knows Mike Nichols, how talented he was, how smart he was. We were saying on the air this morning that anyone who worked with him said their life was forever changed. So brilliant and so damn funny, that’s what I’ll remember about him.

“My first thoughts are with Diane,” Norah O’Donnell said. “Obviously a very tough, hard time for her and his family and you know, you look back at his career and I mean, what an entertainment icon. He won all of these awards, he won an Emmy, an Oscar, a Tony and a Grammy.”

HBO Chairman and CEO Richard Plepler said in a statement to TheWrap: “Everyone overuses the word legend, particularly in our business.  But Mike was in a class by himself.  Brilliant, wise and a remarkable artist whose body of work for theater, film and television is simply unrivaled.  But more importantly, he was also a consummate gentleman.  The combination of all that talent and menschness won’t be found again anytime soon.”

Nichols directed the HBO miniseries “Angels in America” in 2003 and won an Emmy, a PGA and DGA Award for his work.

“Nichols’ knack for impeccable comedic timing paired with unmatched passion for his craft earned him a stellar reputation as countless high-profile stars longed to work with him,” Portnow wrote. “We have lost a brilliant member of our creative community, and our sympathies go out to his family, his friends, and all who have benefited from and have been moved by his extraordinary talent.”

Hollywood also shared their Nichols memories on Twitter after his death. Here are the reactions from those in the industry who were inspired by his work.

RIP the Great Mike Nichols – elite member of the pantheon of directors whether stage screen or tv. Any conversation was rich w/wit & wisdom

Mike Nichols gave me my start. A mentor, friend, colleague. One of the best observers of life. My thoughts are with Diane & his children.

Woke up to news of Mike Nichols’ passing. He was a wonderful storyteller and leaves behind a great legacy, from his life and work. RIP.

So sad to learn of the death of Mike Nichols. My heart goes out to Diane, their families & everyone who marveled at his brilliance.

Mike Nichols leaves behind a staggering body of work. He’s one of the best filmmakers and stage directors ever. Influenced everyone. #GENIUS

Mike Nichols..A legend never dies. When I was struggling young actor, Mike gave me the advice to help me continue on my path. 4ever Grateful

So very sad to hear of Mike Nichols death. A great talent, a wonderful, bright, charming human being.

Everyone who knew Mike Nichols at all had this in common. (And this is hard truth.) We felt blessed for every moment we spent with him. God.

we’ve lost one of the greats. rest in peace, Mike Nichols

We lost a legend today. RIP Mike Nichols. You made your mark on this world, and damned if it wasn’t a fantastic one at that.

Oh No, #MikeNichols Nice man brilliant director!!!! Your vision will be missed

Mike Nichols – Never heard him sing opera but he had the rest of show biz conquered. Writer, performer, director extraordinaire. A sweetie.

Mike Nichols-you are one of the all time greats. A deeply kind soul, and an incredible artist. You will be greatly missed. RIP sir.

Thank you Mike Nichols. And here’s to you Mrs. Robinson. RIP

Met Mike Nichols when he was directing “Postcards from the Edge.” He was gracious and exuded class without trying.

I wish I could capture in 140 characters what a wonderful man Mike Nichols was, and how much I loved him and his work. I will truly miss him

Dammit… Mike Nichols died. I loved him & Elaine May but I was a big fan of his film work. Will watch THE GRADUATE today to honor a Master.

We lost Mike Nichols today. One of the great directors of our time. He will be greatly missed.

Truly, one of the greats. You will be deeply missed Mike Nichols. http://t.co/jhTbZJQWHu

Over 50 years, whenever I needed advice, I’d ‘look it up in Mike’. Thoughts with his beloved children, grandkids and his sweetheart, Diane

This Thursday morning @GMA…we celebrate the wonderful life of an American icon. He was also a very dear friend and family to us at ABC.

Mike Nichols was a brilliant director, actor, and husband. Sending love to my friend @DianeSawyer.

Thoughts and prayers to @DianeSawyer on the passing of her husband, legendary actor/producer/director Mike Nichols pic.twitter.com/BeNXKHyrOP

The great Mike Nichols is gone, he gave us so much brilliant work it’s staggering. We were so lucky to have him, his legacy will live on..

One of the absolute greatest. RIP. Mike Nichols.

R.I.P. Mike Nichols – one of the greats.

One of the greats. #MikeNichols

Filled with sadness today over the passing of the incomparable Mike Nichols. Thank you for all the years of entertainment….

To call him a legend would be an understatement. #MikeNichols

So sad to hear that Mike Nichols died. Everything this genius touched became smarter, classier, and funnier. What a legacy he leaves us…

Mike Nichols is at the back of Death’s bus, smiling wryly, wondering what’s next as he rides into the ether. #RIPMikeNichols

I am beyond sad to learn that #MikeNichols has passed. From The Graduate to Birdcage to Spamalot to his comedy albums, he truly was a Titan.

Mike Nichols??! So sad. What a legend.

Oh, those funless games of Albee’s. Brought to cinema by one of the greats. RIP Mike Nichols. pic.twitter.com/ve65lv9fqX

The best of all I’ve gotten to do was the blessing of working with Mike Nichols. Heaven now has one of the most brilliant, funniest angels.

Good-bye Mike Nichols. Thank you for leaving us with your masterpiece, “The Graduate”. #RIP

RIP Mike Nichols. One of the all-time greats.

Mike Nichols was a true visionary. So sad to hear of his passing this morning.

RIP Mike Nichols, a true genius. Watch one or five of his movies this weekend