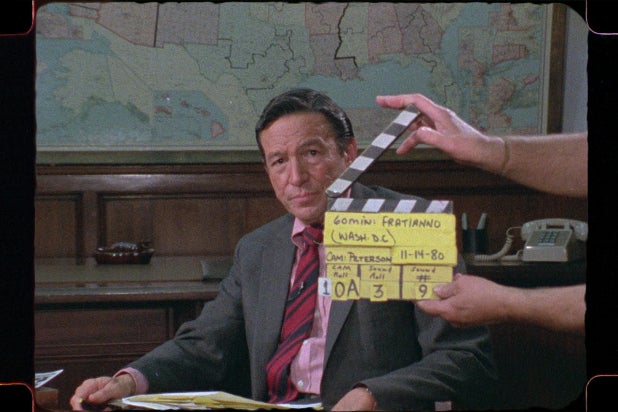 In takes all of ten minutes to realize “Mike Wallace Is Here” is special. Directed by Avi Belkin, the film chronicles the half-century career of the journalist whose work has only become more invaluable since his death in 2012.

Telling the story exclusively through archival footage, Belkin was given free range inside CBS. The result is a prismatic portrait, a movie that sits at the intersection of long-form journalism and riveting documentary.

Wallace was raised in Brookline, Mass., to Russian Jewish immigrant parents. They were disciplinary and icy. He would later attribute his own jagged personality to his upbringing. The film, wisely, doesn’t get bogged down in exposition. Belkin and his editors opt for simplicity. The result is a clear-cut narrative unrelentingly focused on Wallace and his work. Everything else — family, romance, the virtues and vices that accompany daily life — go by the wayside.

After a string of advertising gigs for soap and cigarette companies, Wallace felt empty. He was a rudderless 30-something, in search of purpose in his life. In that void came “Night Beat,” a tough-talking 1950s interview program where Wallace sat across from anyone willing to engage in honest discourse. Politicians were his primary subjects. The show, later renamed “The Mike Wallace Interview,” was the first of its kind. Wallace challenged the guests on his show, and softball questions weren’t part of the equation. He’d poke and prod until he felt the truth had been unearthed. The American public, subsequently, found this theatrical poking and prodding to be wildly entertaining.

As the ’50s turned into the ’60s, Wallace moved on to greener pastures. In 1968 he joined CBS’ new television news magazine “60 Minutes.” Wallace injected life into the program, and it was here that he cemented his style of discourse.

Belkin does a remarkable job of assembling Wallace’s greatest hits. He challenges everyone from Vladmir Putin and Malcolm X to Richard Nixon and Barbara Streisand. These passages are, at times, difficult to stomach. Unlike a Dick Cavett or Studs Terkel, Wallace is more suspicious than curious. He approaches people with a significant (he’d say healthy) amount of skepticism. Potentially guilty until proven innocent.

What’s dazzling about Belkin’s construction is that fragments of Wallace are revealed through these people. Streisand, in particular, puts it plainly: “Why are you such a prick?” (There are such ad hominem highlights throughout.) Her question is equal parts funny and piercing. Wallace is rough around the edges, impenetrable at points. There is some explanation for this, a mix of a painful upbringing and, then, personal pain from the loss of a child.

At the height of Wallace’s success at “60 Minutes,” he found himself in a state of unremitting depression. He speaks on this matter briefly and vaguely. It seems that’s all he can manage. But the window into his psyche is clear and heartbreaking. In fact, his own internal despondency, kept at bay during his time at CBS, is telling. Wallace’s personal demons were never absent or extinguished. They sat just beneath the surface, only to emerge in aggressive, combative interviews.

Without reducing his film to didacticism, Belkin places Wallace’s career in a larger context of contemporary media. Wallace’s tireless pursuit of the truth, the film contends, is absent in the 2019 media cycle. Towards the end of his career, Wallace interviewed Bill O’Reilly. It’s a fascinating tête-à-tête in which O’Reilly insists that Wallace is the reason he entered this business. “If someone has a problem with me,” O’Reilly bellows, “you go to Mike Wallace.” Wallace, with a comically-timed facial retort, is vexed. He does not see himself in O’Reilly, and O’Reilly keeps attacking Wallace. “You’re a dinosaur!” the now-disgraced host barks. People want facts and truth, O’Reilly insists, along with other vacuous words (“fair and balanced”) hurled by Fox News.

The larger point is that Wallace’s radically honest, rigorously-researched interviews, designed to hold people accountable, barely seem to exist in 2019. (At least not on the same scale of “60 Minutes.”) It’s a somber note to close on, but it’s truthful.

After spending hundreds of hours with Mike Wallace — the reporter, the father, the ad-man — Belkin seems to be intimately familiar with his subject. Wallace was a man who put work before everything and everyone else. He strove for greatness and found it. The human costs of his ambition, his success, took a backseat. At times it appears he was blind to the damage or pain he may have inflicted those around him.

But Wallace believed his calling was that of a public anthropologist. For decades we audiences immersed themselves in his findings. His discoveries weren’t always convenient or painless, but they were necessary nonetheless.

What’s clear in 2019 is that television needs him now more than ever. But in this vacancy we’re at least left with “Mike Wallace Is Here,” a masterful, cinematic biography that unpacks a man’s life through his work, showing us an uncompromising and difficult man who apparently wouldn’t have had it any other way.