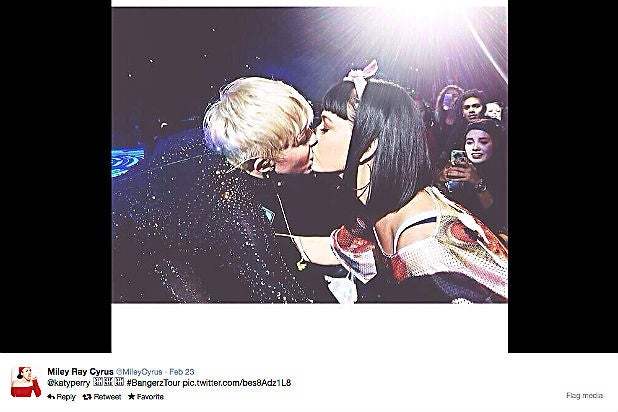 Madonna and Britney’s 2003 MTV VMAs kiss that shook the world may have just got upstaged — figuratively and literally.

Miley Cyrus set the social mediasphere abuzz Saturday when she planted a kiss on Katy Perry‘s lips during a Bangerz Tour concert stop at Staples Center in Los Angeles.

A photo and video (above and below) captured of Miley and Katy’s kiss by concertgoers went viral instantly.

The pop singer was performing track “Adore You” when she leaned over the stage for a moment of girl-on-girl action with Perry.

“I just kissed a girl and I really liked it a lot,” Cyrus said, referencing Perry’s popular song.

Scantily-clad in an array of barely-there leotards, Cyrus brought the house down with her powerful vocals — singing every note of the concert live. Of course, Cyrus served up plenty of risque antics including lots of crotch-grabbing, twerking, writhing half-naked on a bed with a little person, riding a hot dog (yes, really) and grinding with colorful stuffed teddy bears and dogs.

Cyrus set included new hits from her Bangerz album along with covers of Dolly Parton and Flaming Lips. She closed the show with recent hits “We Can’t Stop” and “Wrecking Ball,” as well as an encore of popular 2009 hit “Party in the USA.”