Miley Cyrus was forced to make a detour between stops on her South American tour this week after her plane was struck by lightning mid-flight. And she has video to prove it.

The singer and her team were flying to Paraguay late Tuesday night when they passed through an unexpected storm. Cyrus managed to capture footage of one particularly large lightning strike, which she posted to Instagram, but assured fans that she was safe.

“To my fans and everyone worried after hearing about my flight to Asunción. Our plane was caught in a major unexpected storm and struck by lighting,” Cyrus wrote. “My crew , band , friends and family who were all traveling with me are safe after an emergency landing. We were unfortunately unable to fly into Paraguay. ? I LOVE YOU.”

You can watch the moment below. 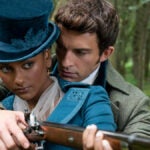 Fortunately, it appears that the strike only hit an edge piece of the plane, rather than landing a blow more centrally.

Brandi Cyrus, Miley’s sister, posted to her Instagram story after the incident, indicating they were forced to land around 8:46 p.m. local time. 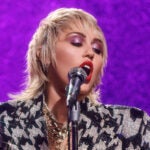 “I’m gonna try not to be dramatic but we almost died,” the younger Cyrus said in the video, clutching her drink. “We just landed in I don’t even know where, 200 miles away from where we were supposed to land, because lightning struck the plane. So, bottoms up.”

Others on the plane captured further video, not of the strike itself, but showing just how intense the storm they passed through was.