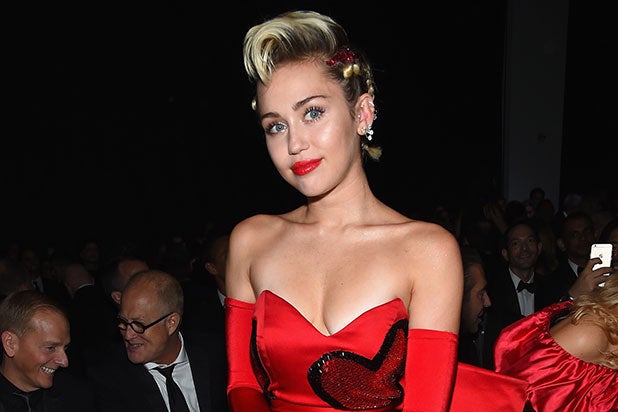 Miley Cyrus compared her time on Disney Channel’s “Hannah Montana” to “f–king ‘Toddlers & Tiaras,'” and thinks it may have led to “body dysmorphia” issues.

In a new interview with Marie Claire, the 22-year-old singer reflected on her childhood, which was spent in the spotlight starting at just 11.

“From the time I was 11, it was, ‘You’re a pop star! That means you have to be blonde, and you have to have long hair, and you have to put on some glittery tight thing.’ Meanwhile, I’m this fragile little girl playing a 16-year-old in a wig and a ton of makeup. It was like ‘Toddlers & Tiaras.’ I had f–king flippers,” Cyrus said.

Disney Channel launched “Hannah Montana” in 2006. Cyrus starred as the eponymous character, who was an undercover pop star. By the time the series ended in 2011, Cyrus was an actual pop star with a number of movies under her belt, too.

“I was told for so long what a girl is supposed to be from being on that show,” said Cyrus. “I was made to look like someone that I wasn’t, which probably caused some body dysmorphia because I had been made pretty every day for so long, and then when I wasn’t on that show, it was like, ‘Who the f–k am I?'”

Cyrus said she worked 12-hour days, which made her mom want to bring in lights for seasonal affective disorder.

“Every morning, I was getting coffee jammed down my throat to wake me up,” she revealed. “I just had to keep going, be tough, be strong. Everything happened to me on that set.”

According to her, that’s around the time she started suffering from anxiety attacks.

“I would have anxiety attacks,” Cyrus said. “I’d get hot flashes, feel like I was about to pass up or throw up. It would happen a lot before shows, and I’d have to cancel. Then the anxiety started coming from anxiety. I would be with my friends, thinking, I should be having so much fun. You get in this hole that seems like you’re never going to be able to get out of.”

And Cyrus, who was announced as the M.A.C. Viva Glam spokesperson in late 2014, doesn’t want to be the face of a traditional beauty campaign, because she is a strong believer that perfection has the power to damage women and the way they see themselves in the mirror.

“When you look at retouched, perfect photos, you feel like shit,” Cyrus said. “They lighten black girls’ skin. They smooth out wrinkles. Even when I get stuck on Instagram wondering, Why don’t I look like that? It’s a total bummer. It’s crazy what people have decided we’re all supposed to be.”

The September issue of Marie Claire will be on newsstands on Aug. 18.