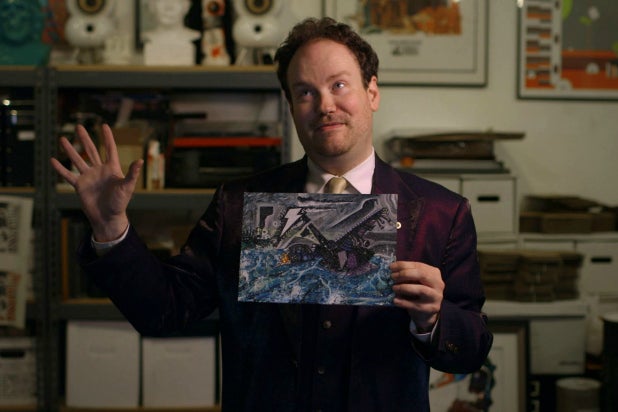 “Million Dollar Duck” is a good documentary about a weird subject. Speaking of oddities, there’s Rob McBroom, a standout from the film, which debuts tomorrow on Animal Planet.

McBroom’s an abstract glitter artist who participates in the very stiff, straight-laced Federal Duck Stamp Contest, which annually determines the artwork that appears on the conservation revenue stamps that help fund wildlife protection. Some might (and do) say he ruins it, actually.

“Apparently, I’ve always sort of fought against authority. I went to Catholic School where I was — I wouldn’t say constantly getting into trouble, but there was enough,” McBroom (pictured above) told TheWrap when we asked him what it’s like being the bad boy of the least bad boy thing ever.

“To be the ‘bad boy’ of the duck stamp contest — it’s not that tough, to be honest with you. There’s a very low bar,” the once-a-year painter and part-time security guard said.

Someone who takes the art competition more seriously is Adam Grimm, who’s also featured in the Slamdance-winning film. His sincere entry paid off, as Grimm won the whole thing — his second “W” in the U.S. Fish & Wildlife Service fundraiser — the year the doc was filmed.

This time, however, winning the 7” x 10” fowl-painting competition wasn’t worth the million bucks in print-licensing value (hence the film’s name, which came from brilliant marketing materials) that it used to be.

Still, it was “worth a fair amount,” he told us during the same interview.

When pressed, Grimm estimated that for a lesser-known artist a win could be worth just $80,000 to $100,000, while fees could eventually reach $300,000 for those with bigger followings. Grimm guesses this time around he made maybe $250,000 over a couple of years — $32,000 of that came from the sale of the original to one of his regular collectors. So, still not chump change.

Also Read: How Common Are Alligator Attacks in Florida?

“Winning the contest — it gives a big boost to your career,” Grimm said, adding that the timing of the film and acquisition by Animal Planet was “definitely a big deal” for him personally.

And the first time Grimm took the prize it truly launched his career, bailing his family out of rough financial times. He’s grateful, humble and talented — the perfect artist to represent the government-run contest.

McBroom is, well, not those things. But he’s funny, and the guy whose bumper sticker reads, “My Other Ride Is Your Mom” doesn’t take anything too seriously — especially this thing. That makes him a great foil for the film, a true cynic among the nature-loving nice guys.

“I go at it from a position where this is going to do nothing, because I’ve had a lot of false starts,” McBroom said of his new notoriety. Still, he allowed himself one moment of optimism with us: “But everything’s been going super-well, but it’s a fingers-crossed situation.”

As you might expect by now, McBroom has never won the Duck Stamp. He’s never come close, actually, which makes sense if you see his trolling work versus the genuine submissions. But what if he gave up goofing on others and painted straight for once? After all, he is an artist.

“I probably would do mediocre in the contest, to be honest with you,” McBroom admitted to us.

While it would probably take three or four years to regain those realism skills, McBroom says he could pull it together. While that could theoretically make him a lot of money, it would also make McBroom boring — and to him, that’s not worth a million dollars.