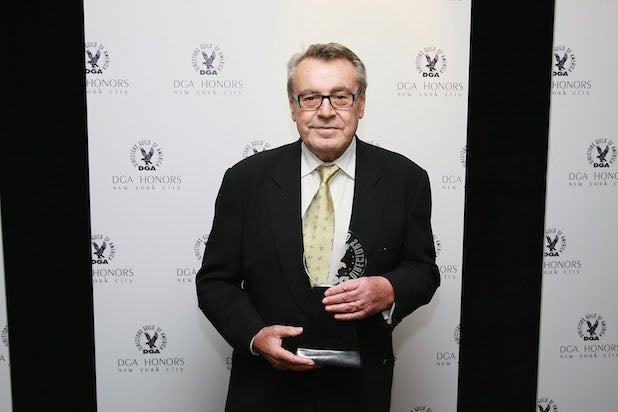 Milos Forman was an “undeniable source of inspiration,” Directors Guild of America President Thomas Schlamme said on Saturday, following the acclaimed filmmaker’s death at the age of 86.

“Milos was truly one of ours. A filmmaker, artist, and champion of artists’ rights. His contribution to the craft of directing has been an undeniable source of inspiration for generations of filmmakers,” Schlamme said in a statement. “His directorial vision deftly brought together provocative subject matter, stellar performances and haunting images to tell the stories of the universal struggle for free expression and self-determination that informed so much of his work and his life.”

Forman directed classics like “One Flew Over the Cuckoo’s Nest” and “Amadeus” — winning an Academy Award for Best Director for both films. He joined the DGA in 1970, shortly after coming to the USA from Czechoslovakia, where the communist regime was cracking down on artists. Forman became the 34th recipient of the DGA’s Lifetime Achievement Award for Distinguished Achievement in Motion Picture Direction in 2013.

“A member of the DGA’s National Board and a recipient of the DGA’s highest honor, the Lifetime Achievement Award, Milos actively championed artist’s rights throughout his career, speaking multiple times before Congress and world audiences about the importance of creative rights and artists’ protections against the violation of those rights,” continued Schlamme. “He stood up on behalf of his beloved fellow filmmakers time and again, and he believed with all his heart that creativity and artistic freedom could make a difference in the world. Now it’s up to us to prove him right. We will miss him.”