It’s March 21 and I’m in a room with about 15 other people for a 20 minute preview of the indie sci-fi film “MindGamers,” while a woman is attaching what’s called a “cognition headband” to my head. “I don’t want to get your hair caught,” she tells me, before getting multiple pieces of my hair stuck underneath the strong adhesive.

After the headband is attached, I’m taking selfies in an attempt to see the side of whatever this thing is. It looks like a bizarre, plastic hearing aid, with one side wrapping around my ear where the attachment glows blue when it’s on. A USB cable is attached to the bottom and it connects to a small Acer tablet, which is running a program that says it’s “streaming” my brainwaves.

Once it’s all over, I try to remove the cognition headband and, of course, rip out huge chunks of my hair in the process.

The headband, awkwardness, pain, and missing hair were all a practice run for an experiment called “One Thousand Minds Connected Live,” a one-night-only event to be held simultaneously at theaters in New York and Los Angeles during the Tuesday, March 28 premiere of  “MindGamers.”

Purporting to seek “a deeper understanding of human cognition and social experience,” up to 1000 viewers will be voluntarily hooked up to cognition headbands and have their brain activity recorded while watching the film. This will, per a press statement obtained by TheWrap, “enable scientists to capture the cognition state of the participants simultaneously via cloud technology and collect data in real time.”

Afterward, during a live Q&A session, what is being called “the first image of a mass-connected mind” will be revealed to the audience.

“MindgGamers” follows six students at a highly advanced science academy as they work to create a collective consciousness. Each student, which includes “The Walking Dead” star Tom Payne, is equipped with a biotag, which when linked allows them to share knowledge and experiences. This even allows characters to swap motor skills with each other — one of the first instances in the film involves learning the skills of an parkour expert.

None of that happens in real life, of course. The cognition headbands don’t actually link the minds of audience members – they just allow observers to perform an electroencephalogram (EEG), a measurement of the brain’s electrical activity, while wearers watch the film. The results from those readings are then aggregated, and used to create the image.

Co-writer and producer Joanne Reay said that when her and director, Andrew Goth, began, they wanted to make a movie that explored the potential of the human mind. After tons of Google searching and reading up on technological advancements, they settled on the idea of technology that could link up minds — something at the intersection of human consciousness and quantum technology.

“As we started to explore, looking at these ideas of how seamlessly tech is interfacing with human consciousness, we realized that just making a movie about it would only be half the exploration,” Reay said during a panel discussion held at the Red Bull offices in January. “We really wanted to underscore how close and inevitable the technology really is.”

“Science is oscillating and scary and exciting all at the same time,” Goth said. “I think that’s why I wanted to work on this film.”

As they were making the movie, both Reay and Goth noticed how quickly technology was advancing and how close it was getting to where it is in the movie. It became essential to convey that. While the experiment isn’t represented exactly in the film, and the people who created it had no creative input, its existence was important.

Also Read: Augmented Reality Will Be Much Bigger than Virtual Reality, Study Says

We didn’t get the full experience participants will at the “One Thousand Minds Connected Live” event, but during our brief preview the devices seemed to function as promised. Before the footage screened, the film crew showed the audience a graph that moved up and down, displaying the results of the EEG. We were then told to blink in unison, which resulted in spikes along each of our tracks. That was, so we were told, our brain activity, although because we weren’t yet watching a movie, there wasn’t much to see.

Once the footage began, it was hard not to be distracted by the headset, which in addition to being awkwardly affixed to our heads also bore similarities to the fictional technology in the film, making the viewer feel partially connected to what the film’s characters are experiencing. 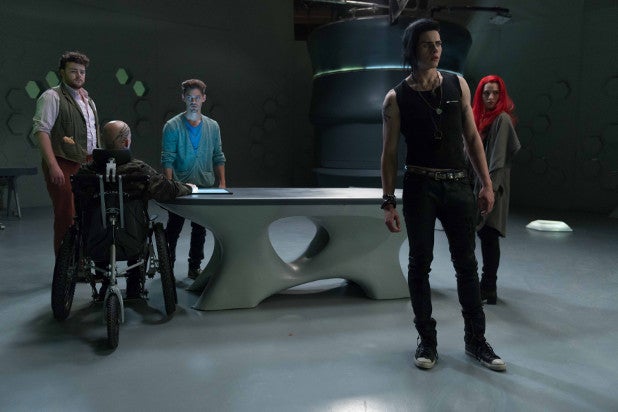 It’s a novelty to be sure, one that might allow “MindGamers” to stand out against in a competitive film market often reliant on gimmicks to grab the attention of viewers. But, as the film’s creators insist, it’s about the experiment. Researchers will monitor the data of hundreds of minds to see if people react similarly or differently in a shared experience. The data and processes could then be used in future experiments. “How do our unique styles and traits determine how our brain respond throughout a shared experience?” the filmmakers note in a statement.

“We could’ve done it as a stunt and it would’ve been fun, but it would’ve been there and gone,” Reay explained. “We actually really [want to] involve real technology to deliver results and can actually be of use then we can create something that has purpose far beyond just the movie.”

Tim Mullen and Mikey Siegel are two of the brains behind that experiment. Mullen is the CEO of Qusp Labs — a neurotechnology firm — and has developed wearable brain-computer interface (BCI) technology similar to what’s being used in these headbands. Siegel is a lecturer at Stanford University who discusses topics concerning technology and consciousness. His Twitter profile describes him as a “consciousness hacker.”

The duo, speaking at a “MindGamers” preview event in January also attended by TheWrap, were bullish on the importance of “One Thousand Minds Connected Live” and claimed it will be one of the largest experiments of its kind ever conducted.

“This is one of the most important issues of our time… we are actually changing as a species,” Siegel said. [The brain is] actually changing the landscape of human culture. We’re profoundly different than what we were 20, 30 years ago.”

As for Mullen, he said in January that the technology presented in “MindGamers” is definitely fictional, but it’s possible to imagine similar technology in a generation — something that will allow information to be shared directly between humans.

“The overarching vision that in the future we will have the ability to link the nervous systems of humans… the groundwork for that is being laid right now,” he said. “It’s accelerating so fast so it’s really possible to imagine that in one generation we might see that fundamental link established.”

That, naturally, remains to be seen. As does the question of whether “MindGamers” will be film worth engaging with beyond the gimmick of a showy scientific experiment. But at the very least, after strapping on a cumbersome headpiece and losing some of my hair in the process, it’s easy to say that “MindGamers” offers a theatrical experience unlike any other this year.

“MindGamers” will screen in select theaters for one night only on Tuesday, March 28.

Correction: We’ve clarified Mullen’s statement on the state of the technology used in the film.