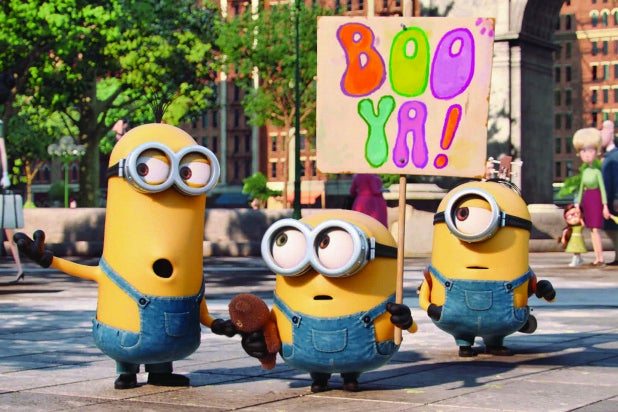 The minions — those roly-poly, slapstick-y, bright yellow Euro-gabbling sidekicks — stole the first two “Despicable Me” movies with their nonsensical singing, pratfalls and good-natured acceptance of their role in life: to aid and enable the truly evil, always with a smile on their flat little faces.

“Minions,” the new movie, tests the notion that what audiences enjoyed as a side dish can satisfy as an entrée; I don’t know if the movie picks up as it goes along, or if it merely beat me into submission, but after an initially slack 20 minutes or so, I did finally start laughing. It helps that, once the story moves into a world we recognize (albeit the world of 1968), screenwriter Brian Lynch (“Hop”) and directors Kyle Balda (“The Lorax”) and Pierre Coffin (“Despicable Me”) can riff on wonderfully absurd gags about everything from time travel to killer clowns to the musical “Hair.”

Narrator Geoffrey Rush tells us that minions have existed since the dawn of life on this planet — yep, this is an origin story — following, at first, unicellular alphas and then larger and larger apex predators, providing their evil overlords with adoration and support before eventually doing something klutzy that destroys their superior. From dinosaurs to Dracula to Napoleon, the minions tail their nasty bosses, until the French army gives chase and they hide out in a cave until 1968. (It’s also a handy way to explain that the minions were nowhere near Germany during the 1930s.)

Decades of self-imposed exile leave them dispirited until Kevin, the taller one, decides to explore the world to find a new Big Bad for the minions to follow; the only volunteers to join him are guitar-playing, one-eyed Stuart and bouncy young Bob. (All the minions are voiced by Coffin.) They arrive in New York, where they’re enchanted by tie-dye and TV — strangely, despite their ongoing obsessions with bananas, none of them picks up a copy of The Velvet Underground’s debut album — and they tune into a secret bad-guy network promoting the upcoming Villain-Con in Orlando.

Hitching a ride south with a bank-robbing family (Mom and Dad are voiced by Allison Janney and Michael Keaton), the minions wind up going to work for international supervillain Scarlet Overkill (Sandra Bullock), who takes them to England, where she and her husband Herb (Jon Hamm) are planning to steal the crown jewels from Queen Elizabeth II (Jennifer Saunders).

If you’re coming to “Minions” expecting much in the way of plot, or even distinguishing characteristics among the title characters, you’re in the wrong movie. But if you’re tickled by the idea of a London police-car chase where all the bobbies in the passenger side are pouring tea into China cups, or an elaborate bit of physical comedy involving running from a bee on a chandelier that’s being screwed and unscrewed (depending on the direction that people are running), you may find yourself succumbing to the silliness.

While the minions are certainly little, yellow and different, “Minions” has probably mined them for about as much comedy as they can provide as leading men. They’ll no doubt continue to find glory being the wind beneath some other villain’s wings, but for now, they’re reasonably competent at being in the spotlight.