“Miracles From Heaven” begins with voice-over narration from Christy Beam (played by Jennifer Garner), a Fort Worth mom who explains that a miracle is defined as an unexpected, positive event that cannot be explained by science. Of course, in reality, that’s only part of the definition. Any unexplained, welcome situation necessarily needs the person or people involved in the event itself to decide that it’s a miracle.

This poses a problem for the cinematic retelling of a story that its author is convinced is miraculous. In fact, it’s a problem facing almost all recent faith-based films; faith is an unseen force, and film must give audiences something to see. “Miracles From Heaven,” then, qualifies as a success: It delivers its miracle without strain.

Based on the memoir by Beam, “Miracles” tells the story of young Anna Beam (Kylie Rogers, “Space Station 76”), whose unexplained digestive disorder leads Christy to battle with a variety of doctors and misdiagnoses. Confidently told that the situation is merely lactose intolerance, or acid reflux, Christy remains unconvinced. Anna vomits everything she eats and is in near-constant pain.

Desperate for an answer, the mother and daughter travel from Texas to Boston, with Christy begging her way into seeing Dr. Samuel Nurko (Eugenio Derbez, “Jack and Jill”), a leading pediatric gastroenterologist. Once there, Anna is diagnosed with intestinal motility disorder, a paralysis of the G.I. tract, a degenerative condition with no cure. 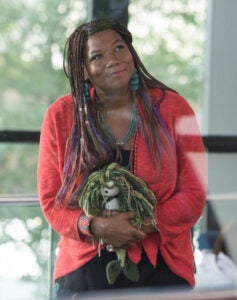 Driven away from church by fellow members who blame sin for the child’s illness, Christy’s doubts overwhelm her. “I don’t have faith in anything. I can’t even pray,” she tells husband Kevin (Martin Henderson, “The Ring”). Anna, too, succumbs to hopelessness, in one of the more honest depictions of childhood depression in recent mainstream film. A good-hearted pastor (John Carroll Lynch, “American Horror Story”) and waitress (Queen Latifah) intervene, but nothing can solve the medical or spiritual crisis.

Then comes the miracle of the title, and it either happened that way or it did not. Thankfully, that’s mostly beside the point, since much of the strength of this film lies in its reasonably restrained script from Randy Brown (“Trouble With the Curve”), which refuses to force itself onto skeptical viewers, and its calm, un-showy direction by Patricia Riggen (“The 33”). She makes only occasional moves into fluffy-cloud-based religious kitsch, wisely focusing instead on human beings trapped between belief and despair.

Almost none of the recent crop of faith-based movies would allow space for unresolved conflict between people of faith, or give child characters the opportunity to discuss their own possible imminent deaths, or to visually suggest that even the miracle promised by its title may have been a product of human imagination. “Miracles” allows for all of this, setting itself apart from angry, paranoid Christian films like “God’s Not Dead,” and even from the much kinder, yet still more sure-of-itself “Heaven Is For Real.”

Meanwhile, the film’s real power comes from Garner, whose solid, memorable work anchors everything around her. Her anxiety spills into every frame she occupies as she demands answers, worries about health insurance coverage, and refuses to smile or stifle her anger. She is real and tough, in ways her film work has seldom given her the chance to be. She’s the bridge the story needs to avoid being pigeonholed as another smug Evangelical advertisement, and her performance elevates “Miracles” to a Christian film worthy of the name.