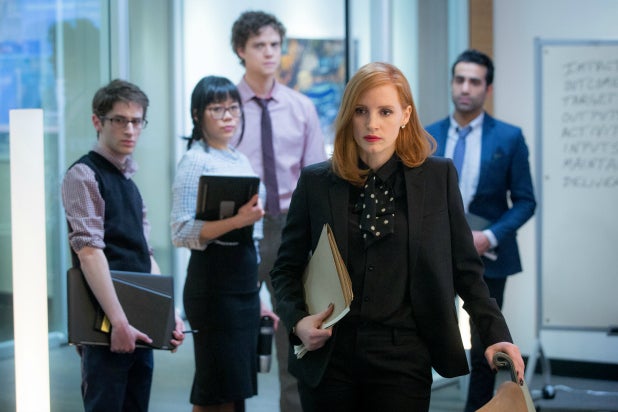 On his podcast, novelist and screenwriter Bret Easton Ellis often opines that the current “Golden Age of Television” is somewhat overrated, mainly because the very nature of serialized writing demands so much focus on story and plot rather than on character. I found myself thinking about his TV/movies dichotomy while watching “Miss Sloane,” a movie calls to mind the “Mad Men” style of contemporary cable drama — in ways both good and bad.

One can imagine Jessica Chastain’s Elizabeth Sloane as (to borrow TV critic Brett Martin’s phrase) a “difficult woman” anchoring a series on HBO, Showtime, Netflix, AMC or FX. One of D.C.’s most formidable lobbyists, Sloane is ruthless, brilliant and brusque, all of which hides her pill problem, loneliness and inability to connect with other human beings. And if “Miss Sloane” were a pilot, we could at least sit back and wait for the character’s vulnerabilities and backstories to emerge, but in the screenplay by first-timer Jonathan Perera, we get all the quirks and none of the depth.

Still, if there’s an actress with the ability to paper over a script’s blank patches, it’s Chastain, who does her level best to imbue this idea of a character with humanity. Cinematographer Sebastian Blenkov (“Men & Chicken”) uses her alabaster complexion as a light-reflecting source, so her face becomes darker in a fancy oak-paneled ladies room and almost translucent in the many brightly-lit conference rooms that seem to have been modeled after the J.J. Abrams version of the Starship Enterprise.

Also Read: Jessica Chastain Says Trump Voters Are 'A Punch In the Gut' to Women

That change in look is fitting for someone who’s such a chameleon, willing to say anything in any context to get what she wants. But while Sloane seems to have no ethical compass at first, we discover that even she has her limits; a Southern senator wants to hire her to make guns more popular with women, a demographic that has been pushing for stricter gun control laws. Not only does Sloane not take the assignment, she exits her job at the District’s top shop and decamps for a boutique firm — the kind she had previously dismissed as being run by “hippies in suits” — to help pass a law requiring tougher background checks.

Most of her team,with the notable exception of her protégé Jane (Alison Pill), follows along as she tackles this thankless assignment, and her success at bringing legislators over to her side puts Sloane in the cross-hairs of the powerful gun lobby, leading to her own investigation by the Senate, with hearings being led by Sen. Sperling (John Lithgow).

To its credit, “Miss Sloane” stages the sausage-making of how laws get passed in this county as interesting cinema, as we see the methods, from the sneaky to the strategic, employed by lobbyists to get what their clients want. Director John Madden (“Shakespeare in Love”) has certainly assembled a powerhouse cast, from Gugu Mbatha-Raw (as an idealistic advocate for more sensible gun laws) to Michael Stuhlbarg (as one of Sloane’s former employers who’s now out to destroy her credibility) to Jake Lacy (doing what he can with a flimsy role as Sloane’s paid sexual outlet – spoiler: he’s got a heart of gold).

In true TV style, however, “Miss Sloane” drowns itself with story, particularly some third-act turnarounds that feel so incredibly contrived and hard-to-swallow that they might as well have been accompanied with a “boi-oi-oing!” sound effect. Rather than take the time to let us really get to know and understand its complicated title character, the movie instead goes for cheap, gotcha plotting that undermines the entire project.

The very existence of lobbyists, and their influence on governance, can make for interesting drama – there’s both a documentary and a narrative about Jack Abramoff, and Sissy Spacek played a great Abramoff surrogate in the later seasons of “Big Love” – but “Miss Sloane” betrays its best features (particularly Chastain’s and Mbatha-Raw’s performances) for some rather clumsy rug-pulling.