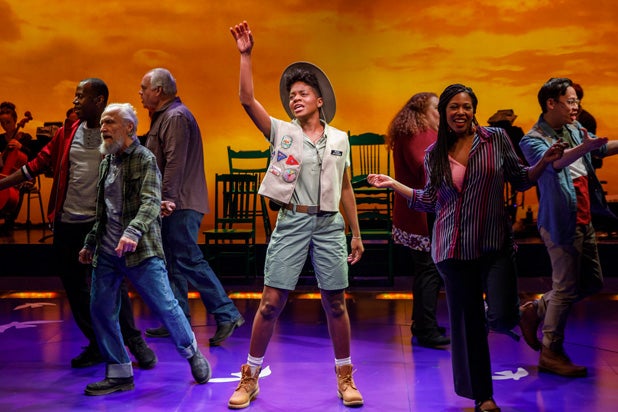 Singer-songwriter Erin McKeown makes her theatrical debut with the music and lyrics for the new musical “Miss You Like Hell,” which opened Tuesday at Off Broadway’s Public Theater. It’s quite a debut. The only new musical with songs approaching the insight and power of McKeown’s is “The Band’s Visit,” and songwriter David Yazbek is a theater veteran.

McKeown does have help from a veteran: Quiara Alegria Hudes, who is book writer and co-lyricist on “Miss You Like Hell,” and has a Pulitzer Prize (“Water by the Spoonful”) and a Tony Award (“In the Heights”) to her credit.

But the music belongs to McKeown alone, and she has written a thoroughly engaging and melodic score. If it lacks the intricate harmonic, key, and rhythmic shifts of Yazbek’s music, the story of “Miss You Like Hell” is much more forthright, and ultimately heartbreaking, than the delicately ironic “The Band’s Visit.” No emotion here is suppressed between the troubled adolescent daughter Olivia (Gizel Jimenez) and her long-absent mother, Beatriz (Daphne Rubin-Vega).

Hudes’ book, far more layered than her work on “In the Heights,” takes no time to warm up. As soon as Rubin-Vega with her duo-tone hair walks on stage and speaks a few words of Spanish, we know that the road trip from Philadelphia to an important court date in Los Angeles is going to be a bumpy ride worth taking.

Hudes’ focus is laser-like in the opening scenes. Olivia’s relationship is with her father, not Beatriz. She calls her mother Beatriz. The father never makes an appearance on stage, and it is immediately clear that maybe he hasn’t been the greatest influence, if he has been any influence at all in Olivia’s life.

Beatriz finds her daughter to be a mess, and not just because of her ratty hair and the way she dresses. Still, there’s no doubt that these two are mother and daughter. Any Rubin-Vega performance is going to be big and hyper-intense. Jimenez matches that energy from the get-go, as if their relationship has been inherited and not rehearsed. And Lear deBessonet’s direction keeps us guessing: Which of the two needs the other one more?

Although Hudes dangles a few clues about that all-important court date, it’s soon apparent that Beatriz is an undocumented Mexican with a long life in America, not to mention a U.S. citizen for a daughter. There’s so much sparring between the two characters that “Miss You Like Hell” functions as a two-hander despite the full cast.

Some are people who follow Olivia’s blog and offer her advice, not always helpful, and others are strangers they meet on the road. There is an old same-sex couple (David Patrick Kelly and Michael Mulheren) who want to marry in every one of the 50 states and a Yellowstone Park ranger (Latoya Edwards), who is little more than welcoming. There is a somewhat unconvincing food vendor (Danny Bolero), who ditches his business to act as chauffeur for part of the trip after a police officer (Marcus Paul James) arrests Beatriz for a minor violation.

Perhaps Hudes felt that there was so much drama going on between Beatriz and Olivia that these secondary characters could be underwritten. In fact, the only villains on this road trip are the authorities. James wisely doesn’t play the cop as a villain. He’s just doing his job, as is the legal clerk (Shawna M. Hamic being the epitome of cool, efficient obstinacy) who won’t cooperate even though Beatriz’s future depends on it.

The major flat tire along the way is the song “My Bell’s Been Rung,” sung by the plaid- and army-fatigue-wearing same-sex couple, who wouldn’t be caught dead doing soft shoe. And somewhere between Nebraska and Wyoming, “Miss You Like Hell” could use an intermission. Road trips, especially ones as fraught as this one, need a rest stop. DeBessonet’s direction is nearly as tireless as her two heroines.