Mitch McConnell may find it hard to wiggle out of this one: the New York Daily News has dubbed the Senate Minority Leader “Spineless McWorm” on the cover of its Saturday edition for blocking attempts to form a bipartisan commission to investigate the Jan. 6th insurrection at the Capitol. Nearly 5 months later, 500 people have been charged in the violent attacks as pro-Trump rioters descended to disrupt certification of the 2020 presidential election.

“Mitch and His GOP Cowards KO Riot Probe,” the Daily News cover caption read that appeared with a creepy graphic of McConnell’s head attached to the body of what appears to be an earthworm emerging from the dirt, which the Daily News posted on Twitter.

The post and pic immediately wormed their way into the hearts of gleeful Tweeters as McConnell quickly became one of Saturday’s trending topics. This responder suggests that McConnell may find safety from haters among his co-earthworms (lumbricus terrestris in your crossword puzzle), although another tweeter called the comparison an “affront to worms”:

Other comments are predictably less empathetic. One Tomi T. Ahonen suggests that WORM is not only the name of a creature who crawls out onto the sidewalk on rainy days but actually stands for “White Old Republican Male”: 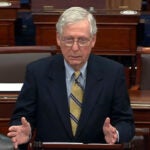 Here, a Tweeter brings in both butterfly and turtle imagery to the general animal theme:

This responder felt the urge to not only repeat McConnell’s newest nickname but added on for former President Donald Trump, calling him a “malfunctioning android.”

The Daily News is no stranger to coming up with animal-inspired nicknames for McConnell, having also called him “Chicken Kiev” for refusing to allow witnesses to testify in the Senate impeachment trial of Donald Trump over alleged Ukraine misconduct. And various sources have compared McConnell’s visage to that of a turtle, with the Change.org website demanding that the politician provide proof that he is not, in fact, part of the turtle family. 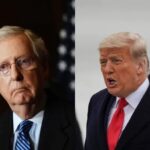