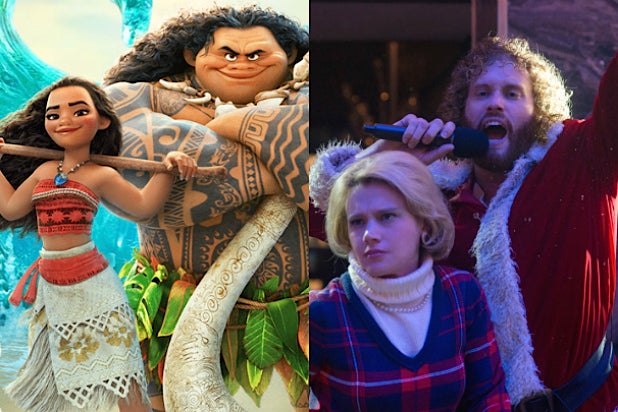 “Moana” topped the box office for the third weekend in a row, edging out new comedy “Office Christmas Party.”

The Jennifer Aniston, T.J. Miller and Jason Bateman-led ensemble movie made $17.5 million — not quite enough mistletoe to boot Disney’s animated hit from first position with its $18.8 million take at this weekend’s box office — but a solid debut nonetheless.

“Moana” earned $4.5 million on Friday alone, playing in 3,875 locations. While Paramount, DreamWorks and Reliance Entertainment’s new holiday-themed comedy made $6.6 million on Friday — bolstered by Thursday night previews — it wasn’t quite enough to take down the movie featuring the voice of Dwayne “The Rock” Johnson.

“Office Christmas Party” has a somewhat low 44 percent on Rotten Tomatoes and a B CinemaScore (given by those surveyed on opening night).

Estimates differed early last week leading up to the debut of the comedy, which is the only new wide release in theaters this weekend — a historically low-performing one at the box office.

Trackers had the R-rated movie opening anywhere between $20 million and $29 million — which would have foreseeably been more than enough to rise above Disney’s animated hit in its third weekend.

But Paramount’s own projections early last week painted a very different picture, with numbers in a much more conservative range of $13 million to $15 million — in line with the opening of the also R-rated “Sisters,” which debuted to $13 million at this time last year.

The lower end of estimates made the movie an iffy bet for No. 1 — still not impossible — but it had a more sure shot at No. 2.

“Office Christmas Party” also stars Olivia Munn, Jillian Bell, Courtney B. Vance, Rob Corddry and Kate McKinnon and was helmed by directing duo Josh Gordon and Will Speck (2007’s “Blades of Glory”). It was made for $45 million, not counting marketing costs, and is playing in 3,210 locations.

Meanwhile, indie movies “Miss Sloane” and “Nocturnal Animals” expanded wide this weekend, though they didn’t crack into the top five (see ranking below).

EuropaCorp’s “Miss Sloane,” in its third weekend as it fanned out into more theaters, grossed roughly $2 million from 1,648 locations. Jessica Chastain’s R-rated mystery, which has a 62 percent on Rotten Tomatoes and an A- CinemaScore, centers on the most formidable lobbyist in Washington, D.C., as she takes on a powerful opponent.

Focus Features’ moody thriller “Nocturnal Animals” expanded in its fourth weekend and earned an estimated $3.2 million from 1,262 theaters. It previously grossed $3 million in its limited run, putting its current total at $6.2 million.

Written and directed by fashion designer and filmmaker Tom Ford, it stars Amy Adams as an art gallery owner who can’t shake threatening thoughts inspired by the writings of her ex-husband (Jake Gyllenhaal), who penned a violent revenge-themed novel which she takes to heart. It has a 72 percent on Rotten Tomatoes.

“Office Christmas Party” stars Aniston as a company CEO trying to thwart the success of her hard-partying brother (Miller) and his CTO (Bateman).

The two guys have to rally their co-workers and host an epic office Christmas party in an effort to impress a potential client and close a sale that will save their jobs.

A look at top animated moneymakers as of September 2019, from "The Lion King" to "Zootopia." The numbers are not adjusted for inflation.