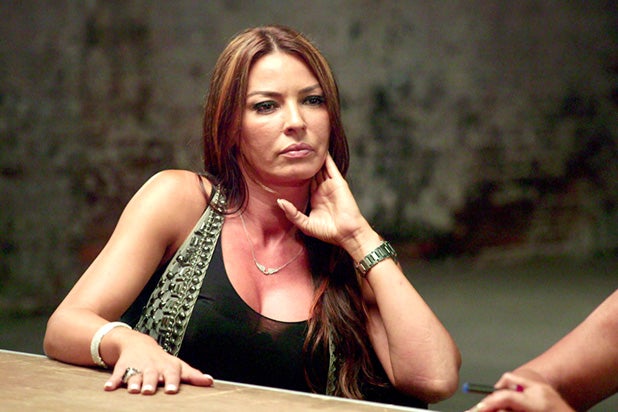 “I just felt that they were very fake. I know too much, I’ve heard and seen it all,” D’Avanzo said in an interview with TheWrap. “So for me to see them sit with one another after what’s been said … it was kind of like a joke to me.”

Though the confrontation ended with what seemed to be a truce, D’Avanzo says she only agreed to play nice with Renee, Carla and Karen because she was tired of hearing what they had to say.

But whatever beef she has with the her castmates is insignificant compared with news of Big Ang’s recent hospitalization. The fan and cast favorite was recently diagnosed with brain and lung cancer, just months after beating the disease in her throat.

Read the full interview below.

TheWrap: Were you intimidated entering the warehouse sit-down?
No. I would never feel intimidated. Especially not by them. I just felt that I didn’t care enough to sit down with them, to tell you the truth. I just felt that they were very fake. I know too much, I’ve heard and seen it all. So for me to see them sit with one another after what’s been said — it wasn’t normal fighting or bickering. It was like awful, awful things about why they don’t like each other and why they don’t want to be friends. But then they’re sitting like best friends, so it was kind of like a joke to me.

I can’t wrap my head around people saying things like they said and then being able to sit there like, “Oh, we just overcame that.” Overcoming things is wonderful and mature, but the things that were said were things like Karen calling Carla racist. Renee came on saying she didn’t like Carla because she slept with her friend’s husband. What happened to that friend, Renee? Like, she doesn’t exist? Or did you make up the story? They’re a joke. That’s exactly how I felt. But a lot of it wasn’t aired, which was annoying to me.

What made you go? It seemed like they were all just waiting to take a piece of you.
Yeah, they’re bullies. I have dealt with bullies and beat them up my whole life. You have to remember that I had Renee and Karen in my ear 24/7 for years telling me to hate Carla. “She’s a bitch, she slept with my friend’s husband, she’s no good.” But I didn’t go for that. I didn’t listen to them, and vice versa. Carla was like, “I can’t stand them. They’re jealous fat bitches,” and on and on. I was just judging people based on how they treated me. But now that it didn’t work in their favor, they grabbed Carla to form a clique against me. Now I can’t respect Karen or Renee or Carla. I have zero respect for them. I also feel like a lot of things can’t be aired, which is tough for me. A lot of the debates and arguments took place off the show.

But it kind of seemed like you guys walked out of there having put everything to rest.
That’s because I didn’t want to hear them anymore. It’s like a child that won’t stop screaming in the store, so the mother is like, “OK, just get the fucking toy, because I can’t hear it anymore.” That’s exactly how I felt. At the end of the day, the only person at that table who is a true friend, and who I’m loyal to is Ang. That’s all that matters to me. In my eyes, I’m just happy that I have her.

But what was going to come out of it? I don’t want to be friends with Carla because I don’t trust her. Everything she says is shit. Karen just lies through her fucking teeth. And Renee is an underlying massive problem. She’s a shit stirrer, and likes to pretend that she’s not.

How is Ang doing?
I’m not going to lie, I’m scared. I don’t want to even believe it. I have to believe in my mind that everything’s going to be OK for me to even be able to function. I’ll be honest — the show is entertaining this season, but when the scene comes on about Ang being sick, it just rips my heart out. I get very emotional. Everyone thinks I’m this tough guy, but I’m a mush. I cried a lot when I found out. People stopped me on the street thinking I got jumped because my face was so swollen from crying. I love her so much.

It’s tough because look what’s she’s going through. I feel guilty about fighting over bullshit when she’s going through this. I really don’t want to stress Ang out any more than she already is. So it’s kind of tough. I’m going to sit here and bicker and fight? That’s not what’s really important.