Based on the best-selling novels by Suzanne Collins, the “Hunger Games” movies have always been a little smarter and a little more assured than their many competitors in the young-adult arena, and now the story comes to a close in “The Hunger Games: Mockingjay, Part 2,” a sequel that, in a crowded field, winds up being one of the year’s most satisfying popcorn movies.

The political satire is intelligent and trenchant (and, it should be noted, far wittier than almost anything in “Our Brand Is Crisis”), the action is thrilling, the characters are empathetic, and while its taken me three previous movies to get there, I find myself getting chills when her fellow rebels give Katniss (Jennifer Lawrence) that three-fingered salute of defiance.

For all of its pulpy thrills, “Mockingjay Part 2” has a lot to say about the nature of warfare and propaganda, the dangers of regime change, and the challenges and rewards of rebuilding your life after it’s been systematically chipped into rubble. That these movies never got completely bogged down by their central love triangle — even though it’s handled skillfully, and we still care about how it’s resolved — is but one of the many achievements of this franchise’s architects. The men in Katniss’ life are important, yes, but they’re not her reason for being.

The film begins without so much as a “Previously on” montage, as we see a close-up of Katniss’ bruised neck, still recovering from the attack by a brainwashed Peeta (Josh Hutcherson). She can barely speak, but it’s important that she regain her voice since District 13 rebel leaders Alma Coin (Julianne Moore) and Plutarch Heavensbee (the late Philip Seymour Hoffman) need the Mockingjay to unite the districts of Panem so that they can jointly overthrow the corrupt, dictatorial regime of President Snow (Donald Sutherland). 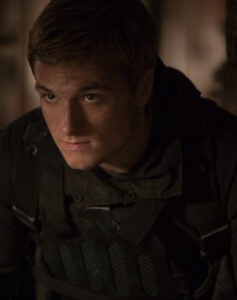 For Katniss, it’s important that the rebels not stare so long into the abyss that they become what they have beheld; when others callously plan to bury one of Snow’s underground bases with an avalanche, it’s Katniss who insists that one tunnel be left open so that civilians can escape and soldiers, if they choose, can surrender. (Not that her idealism is always rewarded — early on, she saves one of those presumably surrendering officers from being shot only to find herself being held at gunpoint by him.)

Katniss tries to shake off the propaganda team documenting her every move so that she can go into the Capitol by herself to assassinate Snow, but Coin wants Katniss on camera, even if that means pretending like Katniss’ rogue decisions were actually Coin’s ideas all along. The Capitol itself has been threaded with deadly traps (not to mention the horrifying “Mutts” in the sewer), so traversing its streets becomes, in the words of Finnick (Sam Claflin), “the 76th Hunger Games.”

Can Katniss battle monsters without becoming one herself? Will Peeta be able to overcome his torture-induced programming and realize that he loves Katniss? Does Gale (Liam Hemsworth) still have a chance to win her heart? And will Katniss discover that she runs the risk of being more useful as a martyred hero than a surviving one?

Readers of the books, of which I am not one, presumably already know the answers to these and other questions, but returning screenwriters Peter Craig and Danny Strong and director Francis Lawrence skillfully interweave political intrigue and deadly obstacles, all while still finding time for moments with the characters we’ve gotten to know over the course of the series. (There’s even room for a little self-mockery, as when Johanna (Jena Malone) commandeers a hospitalized Katniss’ morphine drip and then busts our heroine’s chops for “the whole tacky romance drama and [your] defender-of-the-hopeless bit.”)

Also Read: 'The Hunger Games: Mockingjay - Part 2' to Spread Its Wings in China

Cinematographer Jo Willems, who shot all but the first “Hunger Games” movie, once again creates vivid contrasts between the bunkers of District 13, the now-ruined grandeur of the Capitol and the rustic beauty of Katniss’ home in District 12, and he unpacks an impressive 360-cam that whirls around Katniss, dancing with her sister Prim (Willow Shields), in a rare moment of calm. The effects team pulls off the Capitol’s many deathtraps, even one that could have looked supremely phony — it involves an enclosed space filling up with what looks like crude oil – but instead seems utterly real.

Some might dismiss “Mockingjay Part 2” as “A Child’s First War-Is-Hell,” but given that most mainstream movies have little more on their mind than selling backpacks and action figures, this is a film that dares to be about something while still delivering as a piece of straightforward entertainment. Like most movies featuring and presumably aimed at women, it’s been easy for the culture to slough off this series, but the passing of the years, and the rise of future franchise entertainments, will only burnish the reputation of “The Hunger Games.”