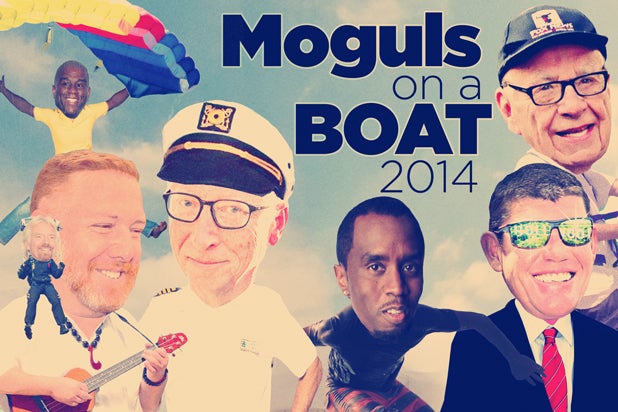 It’s that time of year again! Your favorite moguls are pressing pause on world domination to kick back and relax on their great big boats  and a number of other exclusive spots.

Last year we brought you Harvey Weinstein and Steven Spielberg‘s summer vacations, this year TheWrap is tracking a new crop of Hollywood and media industry players. From billionaire Bill Gates to sports magnate Magic Johnson off the Italian coast, see what high seas hijinks Brian Grazer, James Packer, Rupert Murdoch and more got into below:

WHERE: Off the coast of Sardinia; Gates joined his family on a 450-foot superyacht called “The Serene,” which he rented for a mere $5 million a week from Stolichnaya vodka magnate Yuri Scheffler.

STATUS: With an estimated $79.4 billion fortune to his name, the 58-year-old Microsoft co-founder regained his position as the world’s richest man, according to Forbes’ billionaires list. Gates gave up his position as chairman in February, but remains a board member and technology advisor.

WHERE: The vice chairman of NBCUniversal is rumored to have spent his summer boating around France and Italy with billionaire Ron Perelman and music titan David Geffen, although it’s not clear whose giant yacht they rode into the sunset — Perelman’s 257-foot C2 or Geffen’s 453-foot Rising Sun.

STATUS: If anyone has earned a vacation this year, it’s Meyer. He was promoted from head of Universal Studios in Sept. 2013 to vice chairman of parent company NBCUniversal.

WHERE: The Imagine Entertainment co-founder took a well-deserved time-out in Tokyo

STATUS: Grazer produced the James Brown biopic “Get on Up,” which ironically couldn’t get up at the box office at all. It grossed only $17 million after a week in theaters. Maybe it’ll be good for him to take some time off and let his problems (Tokyo) drift away.

Also read: Moguls on a Boat at Cannes: TheWrap’s Guide to Captains of the Cote d’Azur

STATUS: Earlier this year we learned Davis has plans to bring “My Fair Lady” back to Broadway — maybe he’s carbing up on pizza and pasta in Italy while trying to figure out who to cast.

WHERE: The chairman and CEO of Azoff MSG Entertainment started off in Ireland before heading to the Hamptons.

STATUS: Azoff is one of the most powerful men in music and what better way to celebrate being on top of the world than by munching on Shepherd’s Pie in Ireland and delicious, butter-soaked lobster in Long Island. And he has plenty of reason to celebrate after luring Grammy-winner Pharrell over to his music management company, Global Music Rights.

WHERE: The Australian billionaire and partial namesake of RatPac Entertainment (a film finance company he shares with director Brett Ratner) sailed his yacht to Capri, Italy in June.

STATUS: Between producing a movie about the Steubenville rape case and building a new casino in Australia, Packer is in for a busy summer — so it’s probably good he’s resting up in Italy.

WHERE: Chairman and CEO of Fox Filmed Entertainment has been gettin’ gyro with it on the beautiful beaches in Greece.

STATUS: Gianopulos probably felt like he needed a vacation in April when “X-Men: Days of Future Past” director Bryan Singer was accused of sexual assault on the eve of the movie’s promotional tour. Despite an avalanche of bad press for the film’s director, the teflon mutant movie franchise went on to gross over $740 million worldwide so far.

WHERE: The ESPN president and chairman of Disney Media Networks jetted off to Brazil where he enjoyed the biggest sporting event of the year, the World Cup.

STATUS: While Skipper was enjoying the sights and sounds of the World Cup in person, his network was enjoying record ratings thanks to all the fans watching the soccer games from home. And who says you can’t mix business with pleasure?

WHERE: The Los Angeles Dodgers co-owner, and founder of Magic Johnson Enterprises, enjoyed a three-week trip boating around the Mediterranean along the coast of Italy, all the way to the South of France with wife Cookie. Jackson and his wife, LaTanya Richardson, joined the Johnsons for a portion of the relaxing journey.

STATUS: Johnson didn’t expand his sports empire to include the Los Angeles Clippers after the Donald Sterling uproar, but he is enjoying the Dodgers’ success as the no. 1 team in the NL Western Division.

STATUS: It’s hard not to imagine that every day is a vacation for music and travel mogul Richard Branson, but it didn’t stop him from taking some R&R on Necker Island — his privately owned Caribbean retreat — for his 64th birthday in July.

WHERE: The chairman and CEO of 21st Century Fox vacationed with family on the Greek island Mykonos.

STATUS: With former News of the World employees still being convicted for the phone-hacking conspiracy, and Time Warner’s rejection of his $80 million bid to take over the media conglomerate, Murdoch probably had a lot of stress built up in those 83-year-old bones.  But since sons Lachlan and James — the co-chief operating officers of 21st Century Fox — joined Murdoch in paradise, business was probably never too far from conversation.

WHERE: The founder and CEO of Relatively Media said “aloha” to a Hawaiian vacation.

STATUS: In 2012, Fortune put him on their top “40 Under 40” list, but seeing as he’s hitting the big four-oh in December, he might be in need of a vacation. Also because he’s been travelling non-stop, raising money and doing a road show ahead of a planned IPO. A nice nap on the beach might be just what the doctor ordered.

WHO: Sean Combs, a.k.a. Puff Daddy

WHERE: The rapper, entrepreneur and Revolt TV stakeholder enjoyed booze, cigars, sunsets and the company of Hollywood friends, including Kanye West and Kim Kardashian, as he began his Mediterranean yacht trip on the Island of Ibiza at Italian fashion mogul Riccardo Tisci’s 40th birthday bash. Then he cruised around the coast of Italy, frequently sharing his experience on social media.

STATUS: Combs, who recently reclaimed his old stage moniker, is gearing up to release a new album, “MMM,” and was ranked by Forbes as the wealthiest hip-hop artist with an estimated $700 million to his name. Add that to the recent launch of his own TV network, Revolt, and it’s safe to say Combs had no shortage of accomplishments to toast to aboard his boat.