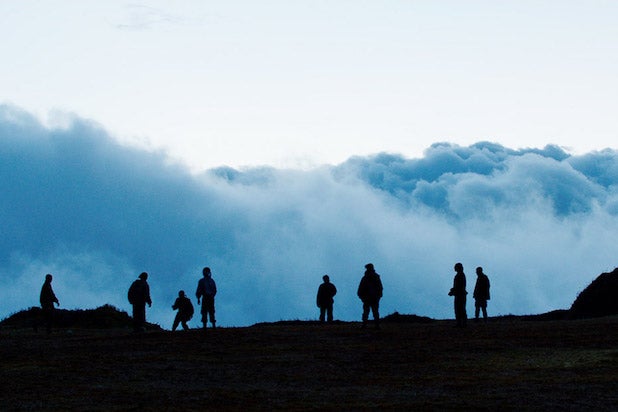 On the chilly, fog-soaked mountains of an unnamed region in Latin America, a group of child soldiers keeps watch over two captives: a solemn-faced engineer (Julianne Nicholson) and a borrowed cow named Shakira. There is some loose order imposed on the garbage bag-wearing guerilla soldiers by a short but fearsome commander from The Organization, an unknown paramilitary group with vague ideals and no stated purpose other than to fight their enemies.

The kids go by nicknames, like Bigfoot (Moises Arias), Lady (Karen Quintero), Wolf (Julian Giraldo), Rambo (Sofia Buenaventura) and Swede (Laura Castrillón). Their human captive is known only as Doctor for most of the movie. We don’t know much else as Alejandro Landes plunges us into the dark world of “Monos.”

Written by Landes and Alexis Dos Santos, “Monos” is like an even bleaker re-imagining of “The Lord of the Flies.” Landes sets the story in an unnamed region in Latin America with vague details. By focusing only on the kids and their prisoner, the film is freed from taking on any extra burden of real historical baggage.

Young adults at best, kids at worst are armed with weapons and put into a chaotic situation without adult supervision. Order deteriorates quickly as control becomes a competition. Although the tribe of gun-toting kids often function as one, they each have distinct personalities and weaknesses that will lead to their undoing. There are hotheads and nervous observers, the proactive types and the reckless ones. Each takes turns clashing against one another.

“Monos” makes it so that the audience’s sympathies align with the doctor’s horrified expressions and her desperate attempts to escape. Together, the kids overpower her, but once factions start to erode their alliances, the cruelty against each other intensifies.

Also Read: Struggles of a Latino Producer in Hollywood: 'I Still Face a Lot of Issues When I Pitch to Executives'

That lack of adult supervision also gives the group some unintended freedoms. Most of them are still teens, and the movie shows what most teens would be interested in at that age: sex and parties. Landes and cinematographer Jasper Wolf luxuriate in the eye-popping opportunities of this prompt. The unbelievably harsh yet gorgeous landscape of the group’s base lends itself extraordinarily well to the grimy hues of muddy grounds, green lichen and dark grey stones. There are many wide shots of the landscape, as if to emphasize the isolation of these kids’ predicament.

At night, Mica Levi’s jarring score revs up with the start of every booze-and-drug-fueled bonfire party, which makes an already surreal-looking scene feel otherworldly. A portion of the score sounds like an engine revving up as the air gets sucked out of the room and modified by a music program. Sometimes, it was so loud, I could feel the sound rattling in my ears even after the movie had gone quiet. There was also a gentler tune for other less intense moments, using what sounds like a traditional wooden flute, but by then, I had already come to dread the jarring mechanical score, which is perhaps the intention.

When the troop decamps to the lush jungles, Landes swaps out mountain fog for humid steam rising through beams of sunlight. It gives a suffocating sense of both places, miserable for all involved. There’s one scene in the beginning that I never could explain, in which the camera voyeuristically peers into the doctor’s room as she’s dancing against a wall in her improvised cell. The scene is framed so that her head is out of the shot, so we don’t know exactly what she’s going through at that moment. Just as the score had left me with questions, throwaway moments like this did too, and in this case, the film’s vagueness does it a disservice.

This is a movie I’ve grown to admire more than I enjoy. Landes’ and Wolf’s imagery is stunning to watch even if his script with Dos Santos leaves off much of the text. As Landes explores the psychology and dynamics of a group of kids being asked to grow up too fast and too violently, he redirects some of our sympathy for the doctor to the kids who are swept up in something they (and by extension, the audience) may not fully understand.