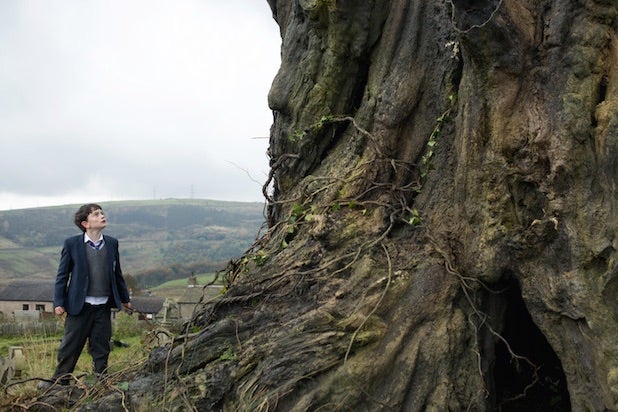 J.A. Bayona’s “A Monster Calls” is a kids’ movie on the surface with very adult concerns not far below — one part “The BFG,” two parts “Pan’s Labyrinth.” The story of a young boy shaken out of his troubled life through encounters with an enormous and fantastical creature, it tries hard to simultaneously be exciting, emotional and magical. And while it doesn’t always manage to nail that tricky trifecta, it provides a number of touching moments and a behemoth to remember.

And at the Toronto International Film Festival on Friday and Saturday, it drew more than a few tears, just as it no doubt will in every other theater where it plays.

“A Monster Calls,” based on a story that was originated by Siobhan Dowd but finished by Patrick Ness after Dowd’s death, tells the story of young Conor O’Malley (Lewis MacDougall), who is bullied at school and then must go home to care for a mother (Felicity Jones) dying of cancer.

Sigourney Weaver and Toby Kebbel also show up as Conor’s grandmother and father, but the most important presence in his life soon becomes a giant creature that emerges from a huge yew tree.

Just as Mark Rylance‘s Big Friendly Giant does in Steven Spielberg‘s “The BFG,” the monster snatches the kid out of his room in the middle of the night (at 12:07, to be exact) and leads him on an amazing journey. In the case of “A Monster Calls,” though, that journey is not played for laughs — instead, the monster, voiced and acted (via motion capture) by Liam Neeson, tells Conor stories that will lead him to an understanding of what’s happening with his mother.

In its mixture of horror fantasy with real-world terrors, Bayona’s film is clearly a successor to his friend and mentor Guillermo del Toro‘s Oscar-winning “Pan’s Labyrinth.” That’s a far worthier ambition than anything you see from most films that entertain thoughts of a younger audience, though it’s also a comparison that does few films any favors. Bayona’s take treads on territory that is more emotional and less fantastical, without the magic of del Toro’s astonishing creature designs or the wallop that comes when we learn what’s behind those child’s fantasies.

Bayona, whose previous films include the well-received 2007 horror film “The Orphanage” and the stomach-churning 2012 survival tale “The Impossible,” reaches for magic with “A Monster Calls,” and finds it fairly often: a scene of gleeful destruction that turns all too real; a climactic cataclysm in which we figure out what the monster’s game really is; some gentle moments late in the film between MacDougall’s tremulous, wide-eyed child and Neeson’s gentle giant.

In those moments, “A Monster Calls” joins another Focus Features release, the animated “Kubo and the Two Strings,” as a film that makes inventive use of fantasy to movingly depict a young boy grappling with serious family issues.

So even though the monster gets too talky at other times, and the character design doesn’t quite allow Neeson to come through the way “The BFG” did for Rylance, this is filmmaking with heart, flair and imagination. At a festival where Focus is already well represented by Jeff Nichols‘ intimate interracial drama “Loving” and Tom Ford‘s daring “Nocturnal Animals,” “A Monster Calls” is a touch of magic in the night.