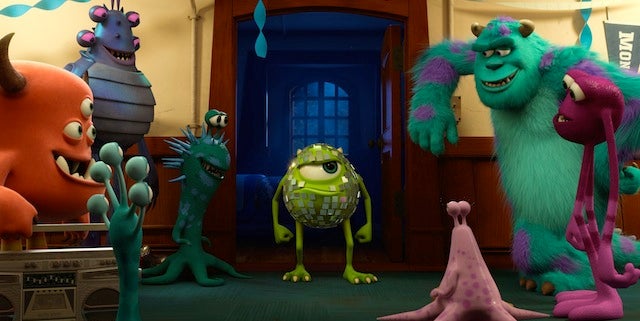 Two charming, flawed protagonists at the end of their rope must rally together a team of misfits and win a big intramural competition to keep their career hopes alive. If you identified that as the plot of “The Internship,” that would be correct, but it’s also a synopsis of “Monsters University,” Disney/Pixar’s prequel to 2001's lightweight but successful “Monsters, Inc.” What “Monsters University” has in its favor is that most of its under-12 audience members won’t recognize the plot elements from “Revenge of the Nerds” or countless other slobs-beat-the-snobs comedies. (“University” also offers a much more visually pleasing color palette, as opposed to the Google-inspired Roy G. Biv optical assault of “The Internship.”)

For all the familiarity of the plot, screenwriters Robert L. Baird, Daniel Gerson and Dan Scanlon (the latter also directed) do at least throw in some unexpected detours on their journey from Point A to Point B — and since it’s a prequel, that’s the least they could do.

But among Pixar movies based on previous Pixar movies, it never reaches the heights of the “Toy Story” sequels while managing to avoid the craven just-here-to-sell-toys-ness of “Cars 2.”

Young Mike Wazowski (voiced by Billy Crystal) is the smallest kid in his grade-school class, but after a field trip to Monsters, Inc., he dreams of one day becoming a “scarer,” those feared and respected monsters who frighten young children at night to capture their screams as the fuel that powers the monster world.

He eventually gets one step closer to his goal by attending the prestigious Monsters University (which shares the “M” logo with Monsters, Inc., although it’s never explained if this is merely a feeder school or an independent entity).

Mike spends long hours in the library learning everything he possibly can about scaring, but it all seems to come naturally to his rival, James P. Sullivan (John Goodman), whose father has already distinguished himself in the field. The rivalry between the ambitious but not naturally gifted Mike and coasting slacker Sully builds to a head during their first final exam, and the damage they cause leads the stentorian Dean Hardscrabble (Helen Mirren) to kick them out of the Scare Program.

The expulsion plunges Mike into despair, and gets Sully kicked out of his alpha-male fraternity, but the two figure out a way to get back in: the campus-wide Scare Games, in which fraternities and sororities compete to see who can be the most adept at child-frightening. Sully gets the dean to agree to let them resume their studies if they can win, and it’s a tricky task, since the only frat that will have them is the milquetoast Oozma Kappa.

To no one’s surprise, lessons are learned about teamwork, and Mike and Sully become the friends that we know them to be in “Monsters, Inc.” Where “Monsters University” subverts the usual kid-movie moral is by suggesting that sometimes you don’t get to follow your dream, no matter how hard you work at it, but maybe something you’re actually great at will surface instead.

And in a message that parents might not embrace, even in these tough economic times, the film also implies that work experience might trump higher education.

For me, “Monsters University” was sweet and entertaining and almost immediately forgettable, lacking the character intricacies and wit and poignancy offered by the “Toy Story” movies and “Up” and “The Incredibles” and the first half of “WALL-E.” But that’s how I felt about “Monsters, Inc.” as well, so if the original movie is one you hold near and dear, you’ll no doubt cherish an opportunity to get to know these characters better.

Crystal and Goodman reprise their comfortable rapport as opposites who come to fill in each other’s empty spaces, and Steve Buscemi is back to show us how chameleon Randy got so spiteful. Mirren and Alfred Molina make for imposing and compelling faculty members, and the cast is rounded out with a lineup of comic all-stars that includes Joel Murray, Sean Hayes, Dave Foley, Charlie Day, Nathan Fillion, Bobby Moynihan, Bonnie Hunt, Aubrey Plaza and Pixar regular John Ratzenberger.

(Attached to the film is a sweet short called “The Blue Umbrella,” featuring a lovely score by Jon Brion. The story of a blue male bumbershoot who falls in love with a red female one, it’s likely to pop up both in the Oscars’ animated shorts category and in future gender-studies term papers on how boy-meets-girl is engrained in children’s entertainment from the get-go.)

Falling as it does squarely between the studio’s classics and its decidedly lesser work, “Monsters University” is a solidly average Pixar effort, one that brings some laughs to the kegger, but you’ll be hard-pressed to remember it at the reunion in 10 years.