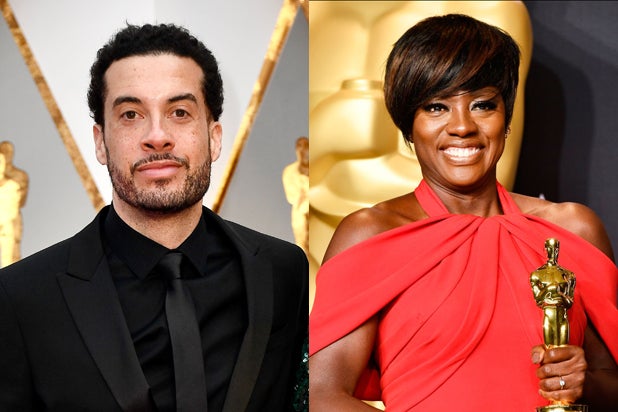 “Moonlight” writers Barry Jenkins and Tarell Alvin McCraney won the Oscar for Best Adapted Screenplay, a historic win that made them the fourth and fifth black honorees of the night, setting an all-time record.

They join Viola Davis, who took home the trophy earlier in the evening for her role in “Fences,” based on an August Wilson play, while “Moonlight’s” Mahershala Ali won for Best Supporting Actor, the evening’s first award. They joined Ezra Edelman, the director of “O.J.: Made in America,” which won the Academy Award for Best Documentary Feature.

Though “Moonlight” also won Best Pictures, none of its nominated producers are black.

Davis’ “Fences” co-star Denzel Washington had a chance to add to the record for most number of Oscar winners of African descent in a single year, as Washington was nominated for Best Actor — but Casey Affleck took home that Oscar statue for his turn in “Manchester by the Sea.”

Barry Jenkins was up for Best Director for “Moonlight,” but was unable to add to the record when Damien Chazelle won in the category for “La La Land.”

Davis had received two previous nominations, but her win this year was her first. “Moonlight’s” Naomie Harris was also nominated for Best Supporting Actress, a category which had three black nominees, also including “Hidden Figures'” Octavia Spencer.

This year topped the previous record held by 2014, when Steve McQueen, Lupita Nyong’o and John Ridley won in three separate categories for “12 Years a Slave,” which tied with 2009 when Geoffrey Fletcher and Mo’Nique won for “Precious” and Roger Ross Williams won for Best Documentary Short Subject for “Music by Prudence.”

Ali made more Oscar history Sunday, becoming the first Muslim actor to win an Academy Award. Though there is some dispute over that distinction as Ellen Burstyn, who took home the trophy for Best Actress in 1974 for her starring role in Martin Scorsese’s “Alice Doesn’t Live Here Anymore,” has studied Sufism, another branch of Islam.