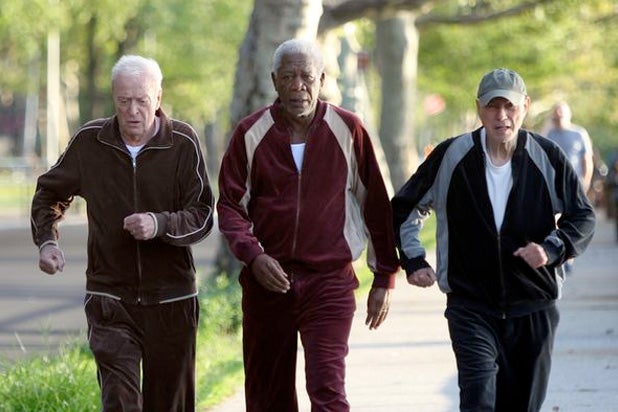 More than 30 percent of all movie theater visits by moviegoers were made up of 50 year old adults and older, according to a new study  by marketing data analytics firm Movio (a Vista Group company) on behalf of AARP.

The study, released Wednesday at the CinemaCon convention in Las Vegas, found that 51 percent of the moviegoers who saw “Jack Reacher: Never Go Back,” “Taken 3,” “The November Man” and “A Walk Amongst the Tombstones” were over the age of 50. According to the research, this is due to fans aging alongside their favorite action stars such as Liam Neeson, Kevin Costner and Tom Cruise.

But the 50-plus demo doesn’t just turn out for targeted fare, such as Warner Bros upcoming remake of “Going in Style” starring Morgan Freeman, Michael Caine, and Alan Arkin — they also turn out for more broadly-appealing blockbusters. Viewers over 50 made up 27 percent for the total audience for 2015’s “Star Wars: The Force Awakens,” and 57 percent of the audience for “Sully,” Movio researchers found.

See Video: TheGrill 2016: Why Online Ticketing in China Is All About Social Media

“‘The 50-plus Moviegoer, An Industry Segment That Should Not Be Ignored’ found that mid-life and older cinema-goers — in particular, those ages 50 and older–are a powerful force at the box office,” said Heather Nawrocki, director, AARP Movies for Grownups. “The 50-plus consumer group is bolstering blockbusters, driving drama film box office revenue, as well as creating lucrative new niches that don’t rely on mega budgets and foreign exhibition success to be profitable.”

“This demographic cluster – the 50-plus – has the ability to significantly contribute to the success of movies at the domestic box office,” Nawrocki added. “The 50-plus audience segment has disposable income, more leisure time and high loyalty to specific actors making this segment extremely valuable.”

Movio also found that this particular demographic was responsible for 75 percent of all visits at art-house movies, contributed to 56 percent of Christian films and drove 54 percent of independent film box office revenues.

On average, audiences aged 50 and older are more likely to go see a movie 15.2 days post-opening of a movie as opposed to younger demographics who go see the movie on opening weekend.

“A better understanding of 50-plus moviegoers can influence the entire movie value chain: from production decisions, to where and when to exhibit a movie and the most effective communication strategy to motivate their cinema-going behavior,” said Matthew Liebmann, Senior Vice President, Movio.  “The ultimate opportunity is to drive incremental revenue for filmmakers and exhibitors whilst also enhancing the satisfaction of this vital segment.”

TheWrap’s Best & Worst 2016: Give yourself a pat on the back if you saw all (or any) of these films