“Morning Joe” host Joe Scarborough was able to find some humor Wednesday morning while discussing Kevin McCarthy’s multiple failures to secure enough votes to become Speaker of the House the day prior. He even said it called to mind an old episode of “The Simpsons,” only this time, it’s the the Republican Party that “can’t govern.”

On Wednesday, the “Morning Joe” co-hosts dicussed McCarthy and how he threw the GOP into disarray. Despite three roll call votes, the House still failed to come to a consensus. McCarthy needed 218 votes, but kept falling short as up to 20 Republicans voted for other members each time.

“For me, for Nancy Pelosi, and for other people who know how to do this sort of stuff, what’s so confounding is that you take a vote where you don’t know the outcome of the vote on the House floor?” Scarborough said of the infighting. “I’m sorry, that’s not even a rookie mistake, that’s just bush league. And you wonder how a guy is sat in Congress that long where he doesn’t know the outcome of this thing.” 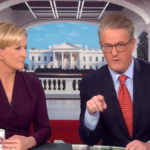 Scarborough explained how at one point, the Republican Party was known as the party that “knew how to get things done,” but that is no longer the case. Instead, the host compared the present-day GOP to an episode of “The Simpsons” in which the family attends both the DNC and RNC; the DNC held up a banner that said “We can’t govern,” while the RNC’s said “We hate people.”

“That applies to this Republican party now: We can’t govern,” Scarborough said. “This is just a follow-up to a disastrous 2022. This is only happening because Republicans screwed up the midterms so horribly. They should’ve won by 30, 40, 50 seats. They should’ve won the Senate. They should’ve had that ‘red wave’ that all the Republican pollsters were predicting, but they didn’t. Now they compound the problem by looking like complete fools in front of the entire world.”

He added: “Those swing voters that are looking at this, they’re going, “It’s a good thing I didn’t vote for Republicans because they really don’t know how to govern.”

Watch a segment of the “Morning Joe” discussion in the video above.