On Monday, excerpts from Washington Post journalists Yasmeen Abutaleb and Damian Paletta's upcoming book "Nightmare Scenario" were published in the paper, including the above account from early in Trump administration's response to the pandemic. Host Willie Geist read some excerpts aloud on air.

"Don't we have an island that we own?" Trump reportedly asked in a Feb 2020 Situation Room meeting detailed in the book. "What about Guantanamo?"

"We import goods, we're not going to import a virus," Trump reportedly added. Aides, per the book, shot that down, given that's the location where the United States holds people suspected of terrorism. 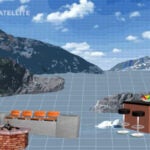 As Geist read through the passage, Joe Scarborough quipped "too late" and laughed. Co-host Mika Brzezinski reminded the panelists and viewers that Trump had not been joking.

Scarborough, on the other hand, did get a joke in: "Now we know why he wanted to buy Greenland," he said, referencing another headscratching moment from the previous administration.

"The ignorance ... well, the feigned ignorance," Scarborough concluded, reminding viewers that Trump disclosed the severity of the virus' threat to journalist Bob Woodward around February or March of that year. To date, over 600,00 Americans have died of COVID-19.

Watch the whole thing above, via MSNBC.