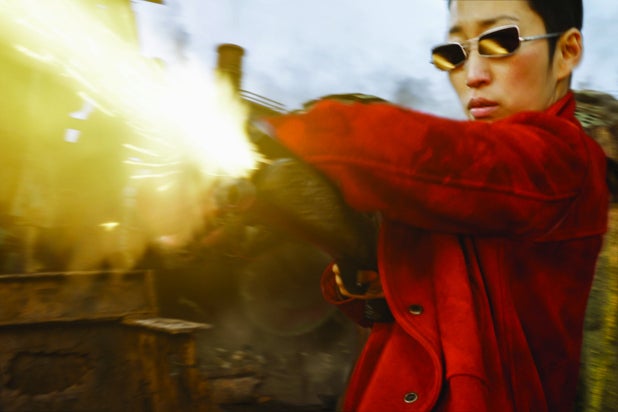 After Thanksgiving weekend, it looked like the Lionsgate movie “Robin Hood” would be the biggest blockbuster bomb of the 2018 box office. But the Sherwood Forest revamp has now been dethroned by Universal/Media Rights Capital’s “Mortal Engines,” an adaptation of Philip Reeve’s sci-fi dystopian novel that opened to a mere $7.5 million domestically this weekend.

Most of this year’s box office flops have been mid-budget releases like “Annihilation” and “The Hurricane Heist,” rather than blockbusters with $100 million-plus budgets like 2017’s “Ghost in the Shell.” “Robin Hood” was the closest to that budget mark with a reported budget of around $97 million.

But “Mortal Engines” had a budget of at least $100 million, with some reports estimating it as much as $150 million. While Universal doesn’t disclose budget figures, it’s possible that the studio might not make back its production costs, let alone that of its marketing campaign. Overseas figures haven’t been good either for “Mortal Engines,” with an international launch of around $34 million and a global start of $42.3 million. Warner Bros.’ “Aquaman” has made it extremely difficult for this film to get a foothold, as the DC film’s global total this weekend nearly tripled that of “Mortal Engines” with $126 million grossed and a $261 million cume.

Like “Annihilation,” “Ghost in the Shell” and even the acclaimed sequel “Blade Runner 2049,” “Mortal Engines” is proving that sci-fi is a hard sell at movie theaters unless it’s got a popular brand like Marvel on it. Universal tried to sell “Mortal Engines” on its connection to the legendary “Lord of the Rings” trilogy, as the Oscar-winning director-writer trio of Peter Jackson, Fran Walsh and Philippa Boyens were attached as writers and producers.

Behind the camera in his directorial debut was Christian Rivers, a longtime collaborator of Jackson’s who worked on VFX for the “Lord of the Rings” films and Jackson’s “King Kong” remake, winning an Oscar for the latter. Aside from “Avatar” villain Stephen Lang and “LOTR” alum Hugo Weaving, the film had no major stars, a common casting decision for Jackson films.

But without any stars, the “LOTR” connection and the elaborate sign of gigantic moving cities wasn’t enough to get people into theaters. Critics panned “Mortal Engines” with a 28 percent Rotten Tomatoes score, praising the VFX and artistic direction but criticizing its story as “dramatically inert,” as L.A. Times critic Kenneth Turan described it.

Even if the film had received strong critical reception, it would have faced the same problem that the well-reviewed “Annihilation” faced earlier this year: conveying the story through marketing. Many recent sci-fi films that involve heavy world-building have had a hard time explaining the basic plot in a trailer to audiences. Much of the marketing seen in recent weeks hasn’t done much to explain who the masked protagonist is that’s played by Hera Hilmar, nor why London is now a villainous moving city and who they are hunting down.

And that lack of basic plot conveyance is especially tough when the film is going up against highly-anticipated movies that are going after the same demographic with recognizable characters.

“If you want big CGI thrills, you’re going to have ‘Aquaman’ and ‘Bumblebee’ in theaters next week,” noted Exhibitor Relations analyst Jeff Bock before “Mortal Engines” released. “These franchises aren’t just big because people recognize the names. They’re big because they’re marketed in a way that makes it easy to understand what the film is about.”

For Universal, it’s a tough end to what has been a very good 2018 otherwise. The studio has grossed around $1.7 billion at the domestic box office this year, with “Jurassic World: Fallen Kingdom” ($416.7 million)” “The Grinch” ($239.2 million) and “Halloween” ($159.2 million) as the lead grossers. While the studio has built its success on a stable of franchises, it has also released a series of original horror hits through its partnership with Blumhouse, including the 2017 hit “Get Out,” which won Jordan Peele this year’s Oscar for Best Original Screenplay. That approach will continue next year when Universal releases Peele’s next horror title, “Us,” in March.

But while Universal has got original horror titles down pat, finding an original sci-fi hit or a new book to mine for hit adaptations is still a rare find for Hollywood, and “Mortal Engines” looks like another failed attempt to reach for that brass ring.